True events inspire Netflix’s The Two Popes. It tells an intimate story of one of the most dramatic transitions of power in the last 2,000 years. Frustrated with the direction of the church, Cardinal Bergoglio requests permission to retire in 2012 from Pope Benedict. Instead, facing scandal and self-doubt, the introspective Pope Benedict summons his harshest critic and future successor to Rome to reveal a secret that will shake the foundations of the Catholic Church. Behind Vatican walls, a struggle commences between both tradition and progress, guilt and forgiveness, as these two very different men confront their pasts in order to find common ground and forge a future for a billion followers around the world. 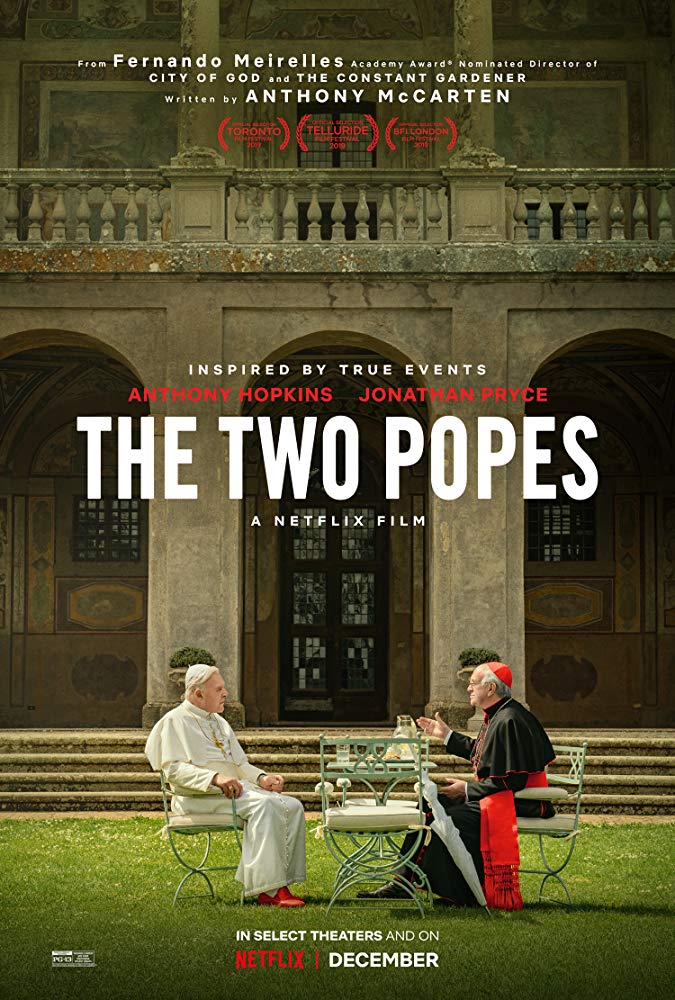 The Two Popes begins in April of 2005 after the death of Pope John Paul II. The Vatican summons Cardinal Jorge Mario Begoglio (Jonathan Pryce) to elect a new pope. Cardinal Begoglio is considered one of the potential front runners, as well as German Cardinal Joseph Ratzinger (Anthony Hopkins). Cardinal Ratzinger is seen as a traditional conservative while Cardinal Begoglio is considered by many to be very progressive. Ultimately, Cardinal Ratzinger is elected and takes the title of Pope Benedict XVI, although Begoglio receives the second highest vote count.

Seven years later, the Catholic Church is in the middle of several scandals. Pope Benedict faces controversy for his involvement in the Church’s handling of many of the pedophile priests’ investigations, including his personal relocation of Peter Hullermann to a different parish after accusations were made against him. Hullermann continued to abuse children at his new assignments.

In Argentina, Bergoglio has submitted his resignation as Archbishop, but the Vatican has not responded. He prepares to go to Rome to make a personal request to the Pope himself when he suddenly receives a letter from Pope Benedict requesting that he come to the Vatican. Humbly, Bergoglio follows his pontiff’s request.
Once in Rome, Bergoglio and Pope Benedict meet at the Palace of Castel Gandolfo, the Pope’s summer residence.

Pope Benedict is concerned about many of Bergoglio’s views, as well as the perception that Bergoglio’s sudden resignation may create. Pope Benedict believes that if he allows Bergoglio to resign it will appear to be in protest to the policies of Pope Benedict and the Catholic Church. The two men of God debate the roles of God and the Church. Bergoglio strongly disagrees with how the Church has handled the sexual abuse allegations and the priests accused, which angers Pope Benedict.

After initially getting into heated debate, the two separate and isolate. Once they begin their conversation again, Pope Benedict wonders what God’s plan is for him and inquires as what led Bergoglio to the Church. Bergoglio recounts his early life where he was once engaged to marry a young woman. However, he called off his engagement and joined the Jesuits. Bergoglio tells the Pope that he was absolutely certain of his destiny when he began, as he is absolutely certain that it is time to retire. Pope Benedict continues to refuse to discuss Bergoglio’s resignation.

Gradually, the two men begin to warm to each other over wine and music. They watch the Pope’s favorite television show, Kommissar Rex, about a police dog that solves crimes. Bergoglio tells the elderly Pope some jokes. The next day, Pope Benedict is summoned back to the Vatican on urgent business and requests Bergoglio to go with him. Pope Benedict continues to avoid discussing Bergoglio’s requested retirement.

Once at the Vatican, Pope Benedict meets with Bergoglio in the Room of Tears within the Sistine Chapel. Once there, Pope Benedict tells Bergoglio that he intends to resign the papacy. In disbelief, Bergoglio pleads with the Pope to change his mind. He argues for the Pope to resign while still alive will do untold damage to the Church, as well as cause controversy for the next Pope. Pope Benedict tells Bergoglio that he has wanted to resign for a while but was afraid that if he resigned Bergoglio and his progressive views would be elected Pope. He didn’t want to see that happen. However, after meeting with Bergoglio he believes that the Church needs change and that change could be Bergoglio.

Bergoglio rejects the Pope’s suggestion, citing to the perception that he had collaborated with the Argentine military dictatorship when he was younger. He believes that his failure to protect his fellow Jesuits and confront the junta damaged his reputation and ultimately led to his removal as head of the Argentinians’ Jesuits. He spent the next ten years as an ordinary priest to the poor. Pope Benedict disagrees with Bergoglio, stating that he did what he could for his fellow Jesuits and it was their failure to follow his commands that led to their arrests. Additionally, he points out that Bergoglio’s actions saved the lives of thousands of parishioners.

Nevertheless, Bergoglio feels overwhelming guilt and memories of his actions and inaction during the dictatorship have continued to haunt him throughout his life. Pope Benedict tries to comfort Bergoglio and gives him absolution. The two men share a pizza and soda together in the backroom of the Sistine Chapel.

While there, Pope Benedict makes his own confession to Bergoglio. He confesses his involvement in the sexual abuse scandal and acknowledges that he should have known what was going on and done more to stop it. But most importantly, he confesses that he no longer hears God’s words and that as a result, he wishes to abdicate the papacy. Bergoglio comforts the Pope and offers him absolution as well. The two great men emerge from the small room as friends, surprising tourists in the Chapel. Pope Benedict goes outside the greet the masses, enjoying the simple joy of interacting with the people. The next day Bergoglio departs the Vatican with a new friendship with the Pope. The archbishop returns quietly to Argentina.

One year later, Pope Benedict resigns from the papacy. The Vatican elects Cardinal Bergoglio, who did not retire, as his successor in the 2013 papal conclave to becomes Pope Francis. As Pope, he rejects much of the pomp and circumstance that is associated with his presentation, choosing rather to appear in simple garments and not lavish robes. Benedict watches on from his television at his home with much joy and admiration.

In 2014, the two Popes get together to watch the 2014 FIFA World Cup Final between Germany and Argentina. They eat pizza and enjoy the match. In the end, Benedict’s Germany defeated Francis’ Argentina 1-0.