Time Bandits begins in Great Britain where a young boy finds his closet contains a time-traveling portal. He soon meets six dwarves who are trying to escape the Supreme Being after stealing a valuable map of his. The group then takes Kevin on many looting schemes through time while dodging the Supreme Being. Kevin meets Napoleon, Robin Hood, and Agamemnon before winding up on the Titanic. However, their adventures also attract the attention of Evil, and he wants that map for his own dirty deeds. 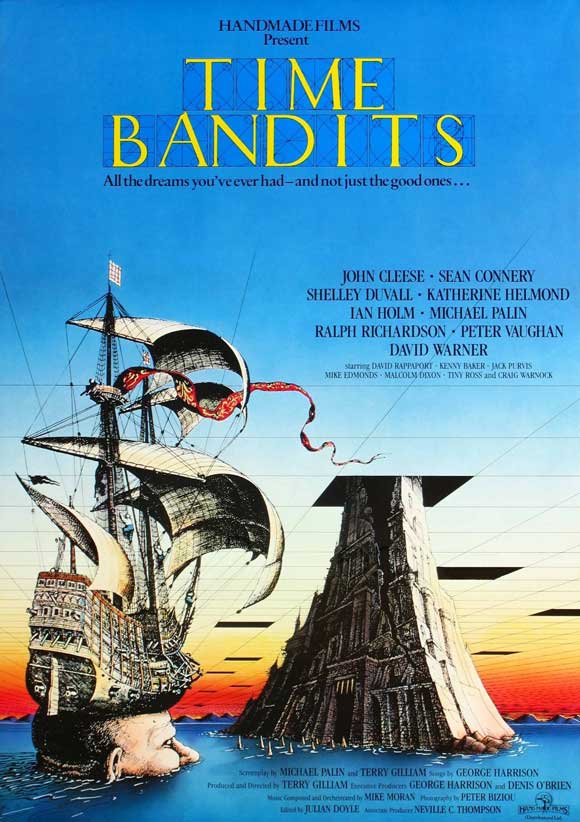 Time Bandits begins in the 1981 world of Great Britain. We find that people prize the latest and greatest gadgets more than family interaction. We meet Kevin (Craig Warnock), an eleven-year old boy with a huge interest in all things history—especially Ancient Greece.

One night, a knight in shining armor awakens Kevin in his bedroom, and runs off into a forest. This sudden, and odd appearance in intrigues the boy, so the next night, he asks to go to bed early; hoping something else will happen. It does, but this time, six nervous dwarves: Randall (David Rappaport)—the leader of the group, Fidgit (Kenny Baker), Strutter (Malcolm Dixon), Og (Mike Edmonds), Wally (Jack Purvis) and Vermin (Tiny Ross) appear to him.

The guys nearly scare themselves to death when they mistake Kevin’s flashlight for the aura of the All Mighty himself. They are running from him because they took his precious map in hopes of stealing from the richest people in history.

They relax a bit when they realize their mistake. However they can’t stay in one place for too long. So, they push one of the walls to Kevin’s room down a long corridor. The Supreme Being (Ralph Richardson) suddenly appears and takes chase. The corridor ends as the wall falls into an abyss. The guys, along with Kevin, fall into the black depths of time and space.

Elsewhere in the Universe, Evil (David Warner) watches the dwarves from a distance with hopes of stealing the map for himself. Then, he will recreate the world in his own image—a wet world covered in plastic bags from the looks of 1981 practical effects.

Kevin and his pint-sized pals begin popping throughout various times in history. They soon meet a whimsical Napoleon (Ian Holm), and later a charming Robin Hood (John Cleese). However, in the forest, Kevin gets separated from the others.

He lands in Mycenae where he soon meets the King, Agamemnon (Sean Connery). He befriends Kevin—much to the chagrin of his queen (Juliette James) who is jealous of the boy. The dwarves finally catch up to Kevin, and rob the king of his valuables.

They then force Kevin to come with them, but he doesn’t want to has he’s finally found someone who actually cares about him—not like his real parents who consistently ignore him. In the blink of an eye, the group finds itself on the doomed voyage of the Titanic.

Evil’s been watching from his off-world perch the whole time. As the ship sinks into the icy water, he uses a spell to trick the dwarves to search for “THE MOST FABULOUS OBJECT IN THE WORLD!” Of course it’s located inside his insidious lair.

Evil has them where he wants them

The group goes to the world where Evil resides before they go down with the ship. When they arrive, a nasty Ogre named Winston (Peter Vaughan) and his human wife (Katherine Helmond) picks them up, and puts them on his ship. Although Winston is quite nasty, he has a back problem, so the group is able to toss him and his wife overboard.

However, they soon discover that they really aren’t in control of the ship. It’s actually the hat of a Giant (Ian Muir), and he’s currently walking himself and the ship to shore. The gang figures out a way to inject a sedative into his head that makes him take a nap. Once asleep, the group escapes to find themselves in a vast desert.

They make their way across an arid land, but before they reach Evil’s lair, they literally run face first into an invisible barrier. Thinking they can go no further, the dwarves begins to argue among themselves. As they are about to remove Randal as their leader, one of them picks up a skull and throws it. It hits the barrier which immediately shatters like a pane of glass. The Fortress of Ultimate Darkness stands menacingly before them.

Once inside, Evil uses the dwarves’ greed to trick them all into believing they have won “THE MOST FABULOUS OBJECT IN THE WORLD!” He easily steals the map from them before imprisoning them in suspended cages. Once he leaves to takeover of the world, the group escapes. As Kevin sets up a diversion, the others run for help.

In a final confrontation, the dwarves bring cowboys, knights, archers, jets, tanks, calvary, and the kitchen sink, but nothing can defeat Evil. When all seems lost, the Supreme Being appears and lays the Holy smack down, and defeats Evil.

All part of the master plan

The dwarves immediately ask for forgiveness for stealing the map, but the Supreme Being says he let them steal it to test Evil. He then orders them to clean everything up, and properly dispose of the debris so no harm comes to anyone else.

Immediately, Kevin wakes up to find himself in his bed. Thick, black smoke billows into his room. Two firemen break down his bedroom door and remove him from his burning home. Outside, Kevin spots his parents fighting over which kitchen appliances they should saved. The two seem to care less if Kevin made it out of the house alive or not.

As morning approaches, Kevin watches the fire consume his home while firemen try to bring it under control. One of the two firemen who saved him asks Kevin if he is all right. Kevin recognizes the fireman as the spitting image of King Agamemnon. Thinking his journey was all a dream, he checks his pockets for any evidence of the trip. He’s amazed to find all of the Polaroid snapshots that he took; confirming that it wasn’t a dream after all.

However, before Kevin is able to show his bickering parents the photos, another fireman comes out of the house with a charred toaster oven in hand. He says someone left it on overnight, and that caused the fire. When Kevin’s parents open the appliance, we see a smoking chunk of debris from Evil’s destruction the dwarves missed. vil rock lying inside.

Alone in the world

Kevin cries out for them not to touch it, but as usual, they ignore him. They touch it, and immediately explode into dust. As Kevin looks for help, he sees the fireman/King Agamemnon wink at him before driving away. Now all alone in the world, Kevin stands on his front lawn with the smoldering remains of his destroyed house, dead parents, and nosy neighbors in the background.