In the futuristic world of 2004, time travel has been invented. However, nefarious individuals attempt to use time travel to benefit themselves. The Time Enforcement Commission (TEC) is created to stop those time traveling criminals. Max Walker is a timecop, who wife was killed ten years before, just as time travel was created. Walker is investigating Senator Aaron McComb, a politician running for President who maybe using time travel for his own benefit. Walker’s investigations leads him back and forth through time where he discovers the tragedies of his past maybe the key to his future investigation. 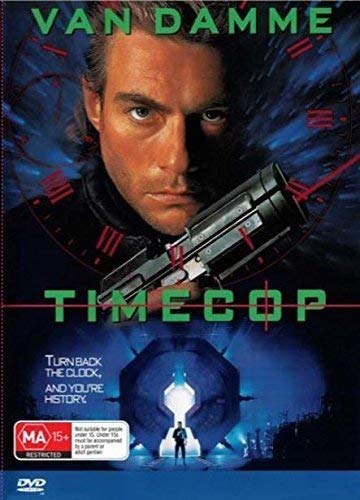 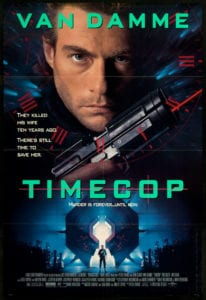 The year is 1994 and scientists have discovered the ability to travel through time. Shortly thereafter, criminals begin using time travel for illicit purposes creating the need for the Time Enforcement Commission (TEC) to police the use of time travel. The TEC is initially supported by Senator Aaron McComb (Ron Silver) who oversees the operations and financing. Police officer Max Walker (Jean-Claude Van Damme) is offered a position with the TEC but is unsure whether or not to accept.

Before he gets a chance to ask his wife Melissa (Mia Sara) what she thinks about the offer, the couple is attacked by unknown assailants. The assailants shoot Walker in the chest and take Melissa upstairs in the house. Walker survives being shot due to his bulletproof vest, but witnesses his house explode with Melissa and the assailants inside.

Ten years later, a long haired Walker is a veteran of the TEC working under Commissioner Eugene Matuzak (Bruce McGill). Walker is sent back to October 1929 just as the stock market is crashing. Walker’s mission is to stop his ex-partner, Lyle Atwood (Jason Schombing), from using knowledge of the future to financially benefit from the economic crisis of the 20’s. After Walker arrests Atwood, the former TEC agent admits to working for Senator McComb who needs the funds for his upcoming presidential campaign in 2004.

Atwood tells Walker that he can’t go on the record about McComb for fear of him and his family being erased from history. Atwood attempts to jump to his death, but Walker catches him mid-leap and returns to 2004. Refusing to testify, Atwood is sentenced to death and returned to his fall in 1929.

Because Walker’s partner turned dirty, Walker is placed under investigation from Internal Affairs. He is assigned a new partner from IA, TEC rookie Sarah Fielding (Gloria Reuben). Fielding and Walker are sent back to 1994 by Matuzak to investigate McComb. They witness a meeting between a young McComb and his business partner Jack Parker (Kevin McNulty), where McComb wishes to dissolve their partnership over a disagreement about a new computer chip. The argument is interrupted by the 2004 McComb and some of his goons.

Back in 2004, Walker discovers that the future has been altered. McComb is now the sole owner of the computer company that created time travel and is a presidential front runner. Additionally, the TEC is being shut down due to budget cuts. Walker appeals to Matuzak, who has no knowledge of the alternate present. Walker convinces Matuzak to help him with his investigation, and the two of them discover that McComb is traveling through time by using the original time travel prototype, which was never dismantled.

Matuzak realizes that Walker may be right and sends him back to 1994 to find the injured Fielding who could testify against McComb. Guards show up to stop the men from using the TEC machine, and Matuzak is shot and killed, but Walker is able to travel back to 1994.

Once back in 1994, Walker tracks Fielding down in a hospital, recovering from her gunshot wound. Feeling betrayed by McComb, she agrees to testify against the Senator. However, she is murdered by McComb’s time traveling goons a few minutes later. While at the hospital, Walker discovers records of a recent visit by his wife Melissa that shows that she is pregnant, something that she was not able to tell him before she was killed in his time line. Walker realizes that she is to be killed that night, so he tracks her down and reveals himself to her. He explains that he is from the future, sent back to protect her and his younger self. He lies to her and tells her that she is alive in his future.

That night, the younger Walker and Melissa are attacked just as they were before. This time though, the older Walker realizes that his assailants are McComb’s henchmen. The older Walker intervenes and changes the past. However, McComb from 2004 appears and takes Melissa hostage, confronting the older Walker with a bomb. McComb reveals that he came back in time to kill Walker, and even though he will die in the bomb’s explosion, his younger self will survive and become President of the United States with Walker out of the way.

However, Walker reveals that he has lured the younger McComb to the house, who enters the room and the blast zone. The elder McComb shoots Melissa, and Walker pushes the younger McComb into his elder self. The two men merge into a malformed, screaming mass which shrinks in size until it disappears from existence. Walker grabs Melissa and carries her out of the house before the bomb explodes. He lays her unconscious body down next to the unconscious body of his younger self before returning to the future.

Once back in 2004, Walker discovers that the time line has changed again. This time for the better. The TEC is no longer being shut down. Both Matuzak and Fielding are alive. Most importantly, Melissa is alive and Walker returns to their home together to embrace both his wife and his 10 year old son as well.