In the year 3028, the Drej, a vicious alien race, destroys the planet Earth. Fifteen years later a young man named Cale learns he possesses a genetically encoded map in the palm of his hand. It leads to the Titan spaceship which holds the secret to the salvation of the human race. With the Drej in hot pursuit, Cale blasts off with the crew of the Valkyrie in an attempt to find the Titan before the Drej destroy it… and with it, mankind’s last chance for a home of their own. 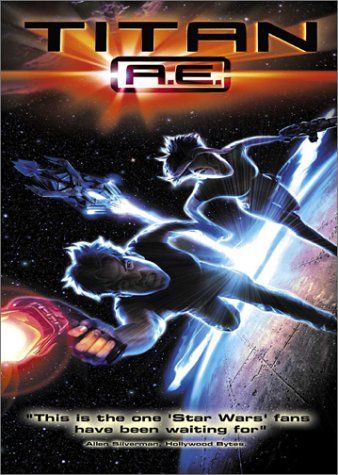 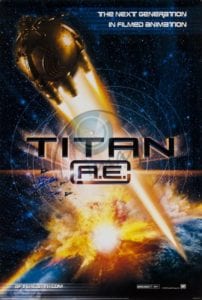 In Titan A.E., the year is 3028. Humanity has mastered Star Wars like hyperspace, and begun mingling with alien species. A pure energy race named the Drej feel threatened by humanity, and the set out to wipe us all out.

Professor Sam Tucker leads “Project Titan” whose work will give humans a place to live if the Drej are successful in destroying Earth.

The Drej succeed, and they give Earth a Death Star blow; annihilating the planet. During their final attack on the planet, Professor Tucker manages to send his son, Cale, off on an evacuation ship under the protection of an alien ally, Tek. He gives Cale his ring, says goodbye, and that’s the last time the two ever see each other again. The Professor leaves separately with the Titan A.E. to an undisclosed location.

Homeless, the surviving humans roam space as nomads with other alien races considering them as inferior.

15 years pass, and a jaded Cale works a salvage yard in the asteroid belt Tau 14. Fellow human, Joseph Korso, captain of the spaceship Valkyrie, tracks Cale down; needing his help to save humanity. He tells Cale that the ring his dad gave him was part of a genetically coded map only visible when Tucker or Cale wears the ring.

Everyday I wake up and it’s still the present. The same grimy, boring present. I don’t think this “future” thing of yours exists. Cale Tucker

The Drej show up as well, and try to kill Cale. He barely escapes with Korso and his crew: Akima, Preed, Gune, and Stith aboard the Valkyrie. While his crew comprise various alien species, Akima is human as well, and she develops a little thing for Cale.

The Valkyrie heads for the planet Sesharrim, where the bat-like Gaoul interpret the map. They calculate the Titan resides in the Andali Nebula, but once again, Drej fighters swoop in. The Drej capture Cale and Akima, but quickly jettison Akima out into space like trash. While the Drej extract the coordinates of the Titan from Cale’s map in his hand, Korso’s crew rescues Akima. Eventually Cale manages to escape the Drej, and rejoin the Valkyrie.

By this time, Cale’s map has changed with the Titan’s final location revealed. However, as they resupply the Valkyrie at the New Bangkok space station, Cale and Akima discover that Korso and Preed secretly work for the Drej.

Cale and Akima escape the Valkyrie, but find themselves stranded on New Bangkok as Korso and crew set out to find the Titan.

Cale, Akima, and many New Bangkok colonists salvage the Phoenix, a small spaceship. The two then race off to find the Titan before Korso does. They manage to navigate through the ice fields of the Andali Nebula, and locate the Titan, before the Valkyrie arrives.

They find the Titan stocked with enough DNA samples of Earth animals to create a new planet. Cale stumbles upon a pre-recorded holographic message his dad left him that gives him instructions on what he needs to do to activate the Titan’s planet regeneration process. Unfortunately, the Titan used up all its power to begin the process when it fled Earth, and Cale must come up with a plan to fix it.

Korso and Preed cut Tucker’s message short with gun shots when they arrive. While Korso tries to take Cale’s ring, Preed double crosses Korso too, and attempts to kill all three. Korso kills Preed instead in the attempt. When the Drej show up to destroy the Titan, Gune, and Stith do their best to hold them off with their limited resources.

Cale hatches a plan to use the Drej’s pure energy to power the Titan’s regeneration system. He modifies the Titan to absorb the species during their attack; enabling the ship to re-energize.

Korso turns back to the light, and sacrifices himself to help Cale complete a repair of one of the stuck power couplings . When the Drej fire their fatal blow, the Titan absorbs the energy beam and their entire race. The Titan begins it’s regeneration process, and creates a new, habitable planet.

Cale names it Bob while Akima refuses to ever call it that. Stith and Gune leave aboard the Valkyrie, as human colony ships approach the planet to start their new lives.

User Rating: Be the first one !
May 13, 2018
4 minutes read
Show More
Back to top button
Close
Close