In Tremors, Valentine “Val” McKee and Earl Bassett try to escape their dead-end lives in the desert town of Perfection, Nevada. On their way out, dead bodies mysteriously appear along their route. Once Val and Earl have a run-in with some odd alien creatures that eats a road crew, they head back to town to warn everyone. Val and Earl soon get help from a scientist named Rhonda to kill the creatures. However, it turns out, these creatures can sense ground vibrations to detect a human above them. Now everyone must be on their toes if they are to stay alive long enough to kill these “Graboids” hunting them. 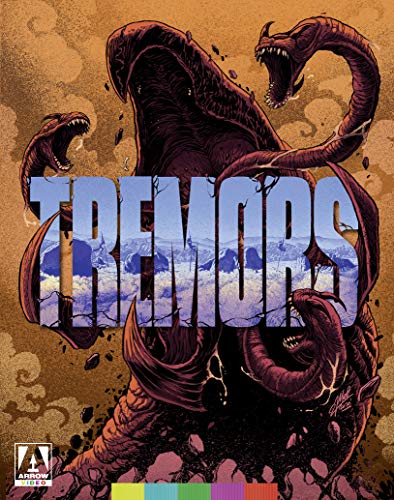 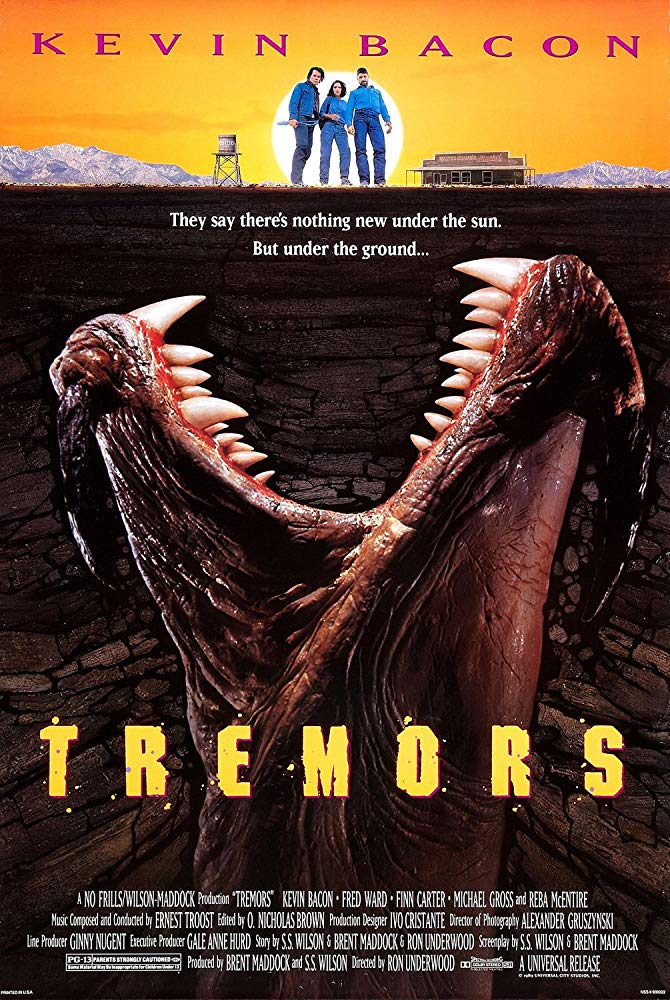 In Tremors, Valentine “Val” McKee (Kevin Bacon) and Earl Bassett (Fred Ward) are two handymen working in the town that time forgot; Perfection, Nevada; ironically, the town’s its founding fathers named it. While the two are always on the lookout for a new way to make quick money, their current job has them digging trenches, moving trash, and literally, taking care of other people’s shit. (Pardon my French.)

One afternoon, after taking a hot shit shower, they attempt to escape to a nearby town named Bixby. Along the way they discover a man dead at the top of an electrical tower. Val and Earl take the dead geezer to Jim (Conrad Bachmann), the town doctor, who lives nowhere near the town.

They about shit themselves (pardon my French), when Jim announces that the man died of dehydration. After the slight delay, the two head out for Bixby for a second time. However, once again, they stop along their route when they discover someone (or something) brutally murdered Old Fred and his flock of sheep. Instead of high tailing it out of there, the two bumbling retards head back to Perfection—believing that a murderer is on the loose.

Meanwhile, our unseen subterranean killer appears and takes out the good doctor, his wife, Megan (Bibi Besch), and a couple of construction workers. This effectively closes Perfection off from the 20th Century literally as well as figuratively. When the residents of Perfection find out that the phones are dead, they send Val and Earl off to Bixby again.

On the edge of town, the boys find a rock slide that occurred during the death of the construction workers now blocks the only road out of town. So they return back to Perfection—along with a large snakelike creature wrapped around their axle. The residents of Perfection dub these new the creatures Graboids.

The next morning, Val and Earl leave on horseback to try to get help. Along the way, they discover the doctor’s buried car before this large sand worm-creature appears from the ground, opens its beak like a grotesque flower, and snaps at them. The horses throw them, and the boys for their lives.

A visiting scientist is just what they need

When they jump a concrete aqueduct, their subterranean attacker rams itself into its concrete wall, and dies from the impact. Rhonda (Finn Carter), a visiting seismologist (and the only character to have apparently graduated high school), comes across Val and Earl. She informs them that there are three more creatures in the area based on her seismic readings.

The boys go with Rhonda to her truck where another Graboids attacks them. The group finds shelter on a cluster of boulders. Once there, they figure the creatures have extremely acute hearing, and sense their location due to their vibrations. However, the Graboids cannot tunnel through rock, and eventually the three make it back to Rhonda’s truck. They then high tail it back to the perceived safety of Perfection—with its shanty-style mobile homes and buildings without concrete foundations.

However, the three remaining Graboids follow Val, Earl, and Rhonda back to Perfection. Val and Earl’s soon find the creatures disabled their truck. Walter Chang (Victor Wong), the Chinese shop owner, finds himself dead when one of the Graboids pops up from under his shop’s floor, and eats him. The creatures then pick the town apart; causing everyone to head to higher ground.

While the citizens of Perfection attempt to get as far off the ground as possible, Burt Gummer (Michael Gross) and his wife, Heather (Reba McEntire), a couple of government fearing, Republican, gun-enthusiasts return to their secluded home after unsuccessfully hunting the snake-things. Bert and Reba contact the others via CB radio, but the noise of the couple’s tumbler leads a Graboid to smash into their basement. The Gummers kill it with an elephant gun, but another of the monsters disables their vehicle; stranding the couple on their roof.

Realizing that the creatures are digging the town out from under them, Val and Earl finally realize they really need to get the hell out of town. They formulate a plan to escape on a Semi trailer with flat tires that a slow-moving bulldozer pulles as that’s apparently too heavy for the Graboids to move. Why do they know this? Fuck if I know. (Pardon my French.) Val runs for bulldozer, and reaches it with the help of the remaining folks distracting the Graboids. Once they get everyone onboard, they all set out for the safety of a nearby mountain range.

However, the Graboids, unlike the citizens of Perfection, learn quick. They dig a trap in the bulldozer’s path which wrecks it. Now stranded, the townsfolk use Burt’s home-made explosives to drive the creatures away long enough to reach the safety of a boulder. There Earl has another great idea; tricking the Graboids into swallowing Burt’s bombs.

You can’t fool the last Graboid

While this works once, the last Graboid decides to spit the explosive onto Burt’s pile of bombs—sending everyone scattering. Val, Earl and Rhonda find themselves stranded just yards from the boulder, with the last Graboid blocking their path to safety.

Val has one more bomb, and one last idea. He lets the Graboid chase him to the edge of a cliff where he then stampedes it with the bomb. As it does, he then jumps out of its way, and sends it through the cliff-face and down to its death. The group returns to town where Earl pushes Val into approaching the clearly interested Rhonda romantically for a happy ending.