In 1938 Los Angeles, the manager of the Culver Hotel leaves his nephew in charge for a weekend. That nephew takes the opportunity to change the name to the Hotel Rainbow. Unbeknownst to him though, the hotel’s actually overbooked with members of royalty, secret assassins, even more secret agents, Japanese tourists, and munchkins… lots of munchkins. (They’re in town for a little film called The Wizard of Oz). A Secret Service agent named Bruce Thorpe and casting director named Annie Clark find romance as they try to take control of the situation. 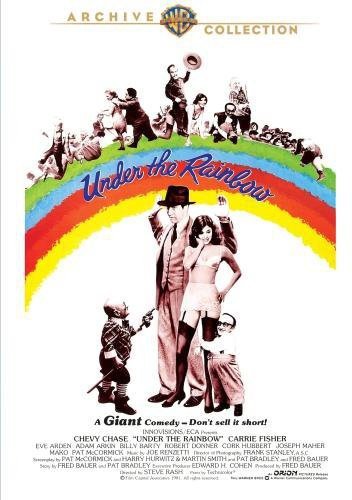 ‘Under the Rainbow’ Movie Summary 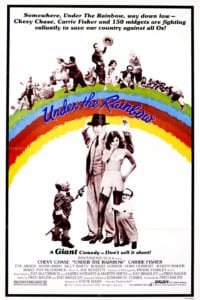 Under the Rainbow begins out in Kansas in 1938. There, a group of tramps, vagrants, and freeloaders suck up government resources quicker than you can say social welfare.

One of those unemployed bums looking for a free ride is Rollo Sweet. He’s so poor he can’t even afford to stand over four feet six inches. During a radio address from the President of the United States, Rollo fakes an injury where he slips off the roof of a barn, and bumps his head.

Meanwhile, the misunderstood Führer of Germany instructs his shortest agent, Otto Kriegling, where to find a pearl in a river. To do so, he must take a special map all the way to Hollywood, California and give it to a Japanese Agent in a white suit. Sounds simple enough.

Out in California, Annie Clark’s boss, Louie, orders her to look after 150 actors who will play the Munchkins in The Wizard of Oz. His dimwitted nephew, Homer, will assist in keeping these little shit heads under control.

Next we travel to New York City, because this movie needs a lot of setup! Federal Agent, Bruce Thorpe, greets the Duke of Austria, his wife, The Duchess, and their dog Strudel for a train ride to Hollywood, California. The Duke thinks there’s an assassin after him, and we soon meet that assassin. His name is not Inigo Montoya, but the Duke’s father killed the assassin’s father, so the Duke must prepare to die. As the train passes through Kansas, Rollo manages to sneak on board via a mailbag. Tiny hitchhikers have a lot of little tricks up their sleeves.

Unfortunately for Rollo, the conductor spots him leaving the train when it arrives in Hollywood. Rollo flees for his little life, as many in the 1930’s train industry tend to cook midgets in Hobo stews. Rollo stumbles into the group of Munchkin actors, and poses as one of them since all little people look the same. Annie even gives him a job in the film.

Now, everyone heads for the Culver Hotel. Agent Thorpe has booked the entire top floor of the hotel for the Duke’s safety, and they promptly check in. A group of Japanese tourists’ bus breaks down in front of the hotel, and they check in while it’s repaired.

Otto Kriegling arrives to meet the Japanese agent, but a large group of yellow faces greets him in the lobby. Otto does what every undercover agent does in this situation. He yells out his secret phrase to a large room of strangers, but no luck here.

Annie Clark then shows up with her 151 Munchkin actors in one hand, and her reservation for their rooms in the other, but there is a little problem. Homer booked the rooms the day before, but the hotel’s whore of a telephone operator wanted to spend the weekend having her boss plow her poop shoot. So, she promptly threw out the reservation, and told nobody about it. This leaves her boss’s nephew, Henry Hudson, in charge of a staff of three to handle the situation. Fun fact of the day: this is the exact reason why Yelp was created.

Otto is pushed in with the Munchkins as the real Japanese Agent, Nakomuri, arrives. He quickly realizes he has the same problem as Otto, but with his slanted eyes, it’s much harder to sort everyone out.

That night at dinner, midgets, white-suited Japanese men, and the assassin that’s not named Inigo Montoya fill the dining room. The Duke, Duchess, Thorpe, and Strudel sit at an inconspicuous table in the middle of everyone. When the Duchess suddenly loses her pearl in her goose liver, a Japanese man yells out many times, “The pearl is in the liver.” Otto mistakenly thinks the yellow man yelled out the secret spy phrase, “The pearl is in the river,” so Otto greets him, and places a military map inside the Wizard of Oz script he is reading. Unfortunately for Otto, Annie takes her script back right after…with the map inside.

The Bodies Pile Up

As this is going on, the assassin that’s not named Inigo Montoya puts a cyanide capsule in a wine glass meant for the Duke. However he misses, and puts the capsule in the Japanese man’s glass instead…the same man who found the Duchess’ pearl. He quietly dies with a face plant in his plate of food.

By now, Otto and Nakomuri have met, and they think Annie killed the man for the map. They soon learn that Thorpe is an American agent, and he’s working with her. The two set out to get the map from Annie, but before that can happen, all the midgets go across the street to get into costume for tomorrow’s filming. In Hollywood, night time is the best time to get 152 actors into costumes meant for the next afternoon.

After getting changed, they all return for a night of drunken mayhem in the hotel except for Otto. He and Nakomuri plan to get the map from Annie, and corner her in the kitchen after searching her room for it, but Rollo is onto them. He duels Otto and wins, but Nakomuri knocks him out with a frying pan.

Annie hides from the men in a walk-in freezer, but gets locked in. Thorpe finds her, and then gets locked in too until Rollo rescues them all. They return to Annie’s room to call the police, but the Munchkins have destroyed all lines. Thorpe and Annie go to the Duke’s room to try there.

The Chase is On

However, while Thorpe was out, the Duke was alone, and the assassin that’s not named Inigo Montoya manages to corner the Duke in his room. He says the reason he’s trying to kill him is because his father was supposed to assassinate the Duke’s father at the beginning of WWI, but he was late and missed a bus. Therefore, he must avenge his father’s failure, and assassinate the present Duke. The Duke runs out of the room for his life. When Thorpe and Annie arrive, Thorpe gives chase, and tells the two women to stay there.

The Duchess runs off after them anyway. The assassin chases the Duke into a barbershop, and right as the assassin is about to kill the Duke, Nakomuri shoves the assassin into a closet, and it knocks him out. Nakomuri and Otto use the Duke and Strudel as bate to get everyone to the barbershop. Eventually, they all show up when they see Strudel scratching at its door.

After the agents capture them all, they search them one by one. Thorpe snaps Strudel’s locket shut to get the agent’s attention off the women. Otto throws Strudel out of the room as they threaten Thorpe one last time to produce the map. He tells them the map is in Strudel’s locket, and Nakomuri has Otto get the dog. By now, Rollo has enlisted all the Munchkins to nab Otto. When they spot him chasing after Strudel, they chase after Otto. Watching 150 midgets run in a mob is absolutely adorable!

Meanwhile, the assassin wakes in the closet, and jumps out to kill the Duke, but Nakomuri shoots him first. As his gun goes off, the assassin kills Nakomuri too. Now Thorpe and Annie go after Otto. The chase breaks out across the street and into the movie studio next to it. The film devolves into the last scene from Blazing Saddles (without the escaping steam) as they cross many sound stages and the Gone With The Wind set. Finally it all ends with Rollo crashing into the Emerald City set from The Wizard of Oz.

When Rollo wakes, we find that just like Dorothy, he never left Kansas, and it was all a dream, but good news for him! A bus headed for Hollywood is waiting for him with other Munchkin actors so they can all work in movies.

Little smiles for everyone.