The film that began the film careers of the infamous Cheech and Chong. Pedro De Pacas and Anthony “Man” Stoner are two potheads who meet up by chance on a highway in California. They go looking for some marijuana and accidentally end up being deported to Mexico. To get back, they inadvertently agree to drive a van made entirely with marijuana from Tijuana to Los Angeles. Now, they are being followed by police officers while trying to make it to a battle of the bands where they believe they can secure their futures. 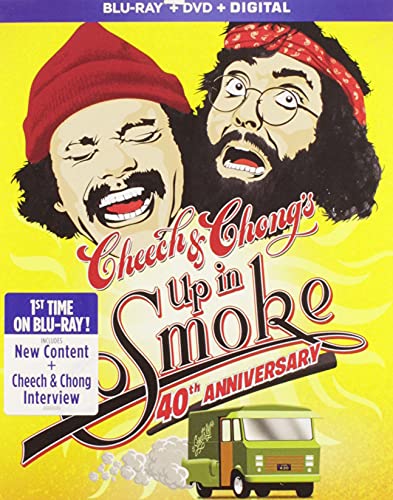 Up in Smoke [Blu-ray]

‘Up In Smoke’ Movie Summary 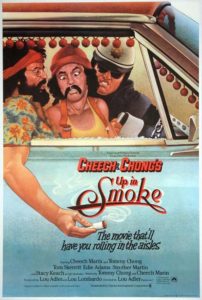 Anthony “Man” Stoner (Tommy Chong) is an unemployed, marijuana smoking drummer. His parents, Arnold and Tempest Stoner (Strother Martin and Edie Adams), threaten their son to get a job by the end of the day or he will be sent off to military school “with that goddamn Finklestein shit kid.” Not wanting to face military school, Man moves out of his parents’ house and hits the road. After Man’s car breaks down, he is picked up along the highway by Pedro De Pacas (Cheech Marin), who mistakes Man for a big breasted woman. The two men share a passion for marijuana and enjoy a joint together as they drive down the road. The marijuana is powerful, and an impaired Pedro ends up parked on a traffic median. The police find them and arrest them for being in possession of drugs. At their initial court appearance, the judge (Marian Beeler) dismisses their case on a technicality after Man discovers that the judge is drinking vodka while on the bench.

Once free, the pair go in search of more marijuana. They go and visit Pedro’s cousin Strawberry (Tom Skerritt), a Vietnam War veteran. Strawberry takes Pedro on an errand while Man stays at Strawberry’s house. A large group of people come over to Strawberry’s house while he is gone and begin to ingest whatever substances they can find in the house. When Strawberry and Pedro return, Strawberry notices that his house is being raided by the police. The mentally deranged Strawberry believes that the police are Viet Cong, while Pedro helps Man escape the raid.

The only kind of meat a priest could eat on Friday was nun. Sergeant Stedenko (Stacy Keach)

Not long after, Pedro and Man are deported to Tijuana, Mexico by immigration when some of Pedro’s relatives call INS on themselves so they could get a free ride to a wedding in Tijuana. Pedro and Man want to return to the United States and arrange to pick up a vehicle from Pedro’s uncle’s upholstery shop. The stoners go to the wrong address and end up at a marijuana processing plant disguised as an upholstery shop. They unknowingly agree to smuggle a van constructed entirely of hardened marijuana from Mexico to Los Angeles.

Unbeknownst to Pedro and Man, a police narcotics unit, led by Sergeant Stedenko (Stacy Keach), is conducting surveillance of the highways between Tijuana and Los Angeles based on information that someone would be attempting to smuggle marijuana. Stedenko and his men get close to discovering the van, but they arrest a car full of nuns instead after Man throws his smoking joint into their car. Eventually, Stedenko discovers that they arrested the wrong car and that Pedro and Man’s van is the proper target. Stedenko engages in a hot pursuit along the road, but they are stopped suddenly when one of the officers shoots out their own tire.

On the way to Los Angeles, Pedro and Man pick up two hitchhiking women, Jade East (Zane Buzby) and Debbie (Ann Wharton). The girls convince the stoners to perform at a Battle of the Bands contest at the Roxy Theatre. At the same time, the van begins to smoke from the heat coming off the exhaust pipe. The smoke gets a motorcycle cop who tries to pull the van over high. The boys, Jade, and Debbie arrive at the Roxy. Man is disturbed that the audience is hostile towards the bands performing and begins to freak out. Jade gives Man what she believes is an upper, but mistakenly give him the wrong drugs. The van continues to smoke outside the venue, and the marijuana smoke enters the Roxy and gets the audience, including Stedenko and his men, high. Pedro and Man perform with Pedro’s band, Alice Bowie, and win the contest and a recording contract. The van catches on fire outside the Roxy.

The film concludes with Pedro and Man driving in Pedro’s car again. The two dream about their future. Man lights a small portion of hash and gives it to Pedro. However, the hash falls into Pedro’s lap, causing him to panic and swerve the car. Man attempts to put out the burning hash with his beer. The film ends with the car swerving along the road with smoke billowing out of its windows.