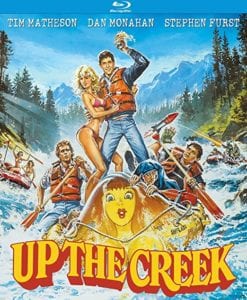 Okay, this is one of my guilty pleasures. This is definitely NOT deserving of my ranking of 9 out of 10 in the grand scheme of things. This is stupid, moronic, stereotypical, razor-thin plot… basically every negative the actual movie critics use to crucify this movie is correct. The difference—I LOVE IT!!! There are times in life where you just gotta throw out all the proper movie rules and just live vicariously through silly, dopey characters on-screen. The characters are funny, the settings are beautiful, the women are lovely, the dog is smarter than his masters… I could go on. There is no reasoning other than to say this movie always makes me feel good when I watch it. That’s all I ask of this silliness.

The story of four college dimwits blackmailed into representing the worst university in the America in a collegiate raft race against Ivy Academy, the Military Institute, etc… Basically, tiny David against the bleach-blonde, well-funded and egotistical Goliaths of the early-1980s. The poster when it came out called this “Animal House on the river”. They aren’t far off. They even employed two “Animal House” alums – Tim Matheson and Stephen Furth (Otter and Flounder). It’s a raunchy, silly comedy where the raft race takes the background to the drinking, partying, and girl-chasing so prevalent in this generation of college party movies.

I used to recommend this movie to college guys back in the late-80s/early-90s at the video store knowing they’d be drinking and laughing through the entire thing. This movie was designed for people who were not using their brain cells. It’s just a fun movie with very little plot to follow. Grab your beer, sit back, and let loose. If you’re watching this movie for any other reason than listed above, you’ll be disappointed. VERY similar to “Strange Brew” and their awesome followers. It’s a blast!!

I bought this movie a few years ago on DVD when I found out it was available. Thank goodness since I’d already worn out two VHS copies over the years. Now, it has JUST been released on BluRay. I’m waiting for my copy in the mail. I do understand there is a new retrospective on the BluRay with some of the cast and casting director. That alone is worth the price. If you love silly, stupid, early-80s T&A films with zero plot and just a fun ride, this is one of the best of that generation.