‘Up The Creek’ Movie Summary 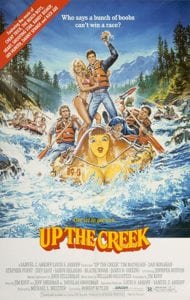 Up The Creek is a classic David vs. Goliath story set within the dignified confines of a collegiate white-water raft race, featuring such distinguished higher learning institutions as: Ivy University, Washington Military Academy, and Lepetomaine University.

That’s right—good ol’ Lobotomy U has sent the four worst college students in the entire country to row for their college in an inflatable dinghy. Led by Otter from Animal House, and looking as though he’s been in college since that movie was made in 1978, he brings along Flounder, who is channeling his inner John Belushi, Pee-Wee from Porky’s, and to round out our team, we have Howard Wolowitz’s dad with glasses and a perpetual hangover.

The untrained 30-something boys are threatened by Lepetomaine’s dean to win the race or else he not only kicks them out of school but turns them in for unpaid college loans in 16 different names. But if they DO win, he generously offers them degrees of their choice, including that extremely difficult to obtain bachelor’s degree in Home Economics. Properly motivated, they drive to Central Oregon with their raft, a truckload of beer, plenty of gas from Flounder, and multilingual Chuck The Wonderdog.

On the way, the boys may be full of hopes and dreams and beer but the gas tank is empty. They stop along with several of the teams to fill up. Flounder and Wolowitz’s dad bait and switch the gas attendant into filling up their tank, but he fills up the tank of Hot Girl U’s quartet of beautiful bouncy bathing beauties, as well as the tank of the rich snobs from Ivy U, all while charging Ivy for the privilege.

While they gas up, Miss Charles-In-Charge herself, or more aptly named Heather Meriweather, finds out her boyfriend from Ivy U, Young Superman with bleached hair, has been cheating on her. She drops him like Lex Luthor dropped Lois Lane from the sky. Otter comes to her rescue, only to have Superman take a swing at him, knocking Heather down. Otter charms Heather into potential intercourse while Superman cowers before Chuck the Wonderdog.

Ivy stops at a covert campground and are handed explosives and bladed oars by none other than Hill Street Blues’ own S.W.A.T. leader, Lt. Hunter, who promises Superman that for a mere $5,000 cash they could not only own the trophy, but get laid for six months in the process. Wonder which part the NCAA would have a problem with most: bribing a president or having them sleep with hot supermodels who wouldn’t sleep with them unless they paid for them? Sounds like this college changed it’s name to Trump University shortly thereafter

Once in town for the raging party I mean, legitimate college raft race, Otter and the Boys get right to drinking. During a night of drunken debauchery and bedtime stories with borrowed books, middle-aged Otter ends up with a date to deflower teenaged Heather later that evening. 10 minutes from heaven, Otter accidentally kiboshes the sabotage efforts of the 3-time defending champion Military Academy’s leader, Captain Schnoz, who is caught by the crooked officials and the Academy is disqualified from the race. Cap’n Schnoz swears revenge like any sociopath would when he doesn’t get to play with the other children.

The next morning, the raft race begins with a couple dozen teams that are only in the movie because we can’t have only four teams or that would be just stupid. They all arrive for the race but nobody is excited so a busty blonde rips off her shirt to cheer people on. We can only imagine how she paid for HER schooling. The race launches but several teams are instantly destroyed by Ivy’s snitching, the Academy’s itching and Wolowitz’s dad’s bitching. No point in explaining further or that would ruin the plot.

That’s the first 40 minutes. The last hour has something to do with Lobotomy U having to overcome exploding airplanes, exploding torpedoes, exploding darts, exploding rivers, exploding cabins, and Flounder’s exploding colon. If you wanna make a T&A rafting movie in Oregon, it’s important to pack dynamite in your carry-on. Needless to say, shenanigans ensue. Lobotomy’s raft is blown up and repaired so many times, MacGyver would be asking them, “How the hell did you fix THAT??” Ivy acts like spoiled rich douchebags always do. The hot chicks show plenty of T&A so we get what they’re paid for.

The Military Academy tries to kill everybody without actually spilling any blood except their own because this is a comedy. Wolowitz’s dad is kidnapped, but we find out that Chuck the Wonderdog is not only fluent in English, Spanish AND charades, but he also speaks a fair bit of Japanese when he acts out “Down Liver”. The Wonderdog was robbed for the Oscar that year. And in the end, Otter lays more pipe than Roto Rooter ever dreamed. All while blowing up a perfectly good cabin for no other reason than to show that Lt. Hunter had sex with a smoking hot blonde that asked about his plumbing.

We won’t tell you the ending, but remember, this is T&A heaven advertised as “Animal House On The River” so you figure it out, and that’s Up The Creek!