In Weekend at Bernie’s, Richard and Larry are two best friends who discover that someone is embezzling money from their company. When they inform Bernie Lomax, who heads the company, of their findings, he’s so pleased that he invites the two to his beach house for a weekend party. However, once they arrive to Bernie’s pad, they discover he’s dead. While Richard wants call the cops as quickly as possible, Larry wants to have his weekend of fun, leisure, and women. 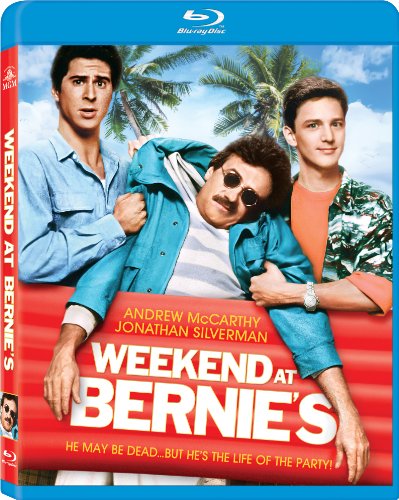 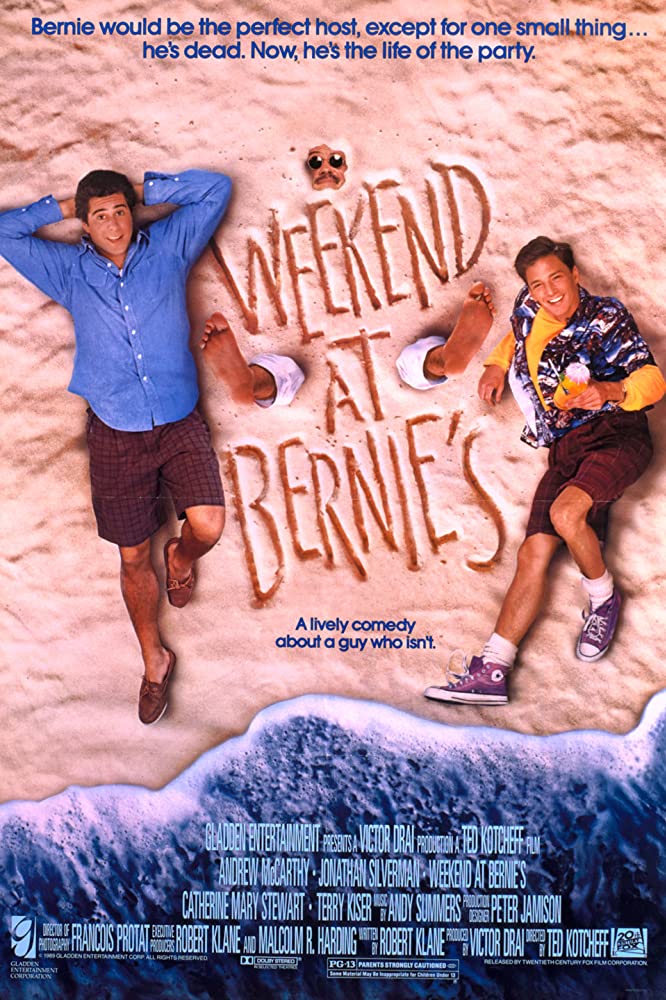 Weekend at Bernie’s begins with Larry and Richard, two employees at an insurance company in New York City. Richard discovers some fraud at the company, and the two take their findings to their CEO, Bernie Lomax. He commends them for a good job, and invites them to his Hampton home for the Labor Day Weekend.

Once back at the Hamptons, Bernie gets a call from Paulie; asking for directions to his house on the island. Somehow, Bernie manages to unknowingly record the whole conversation on his answering machine. He details his plans to plant the money with a fake note; implicating Larry and Richard in the fraud. Then Paulie can kill them. When Paulie arrives, he kills Bernie by injecting him with drugs. He then makes it look like an overdose, and leaves the island.

Larry and Richard arrive at Bernie’s to find him dead, and the hilarity begins. As they debate calling the police, the arrival of a floating party are interrupts them. None of the partiers notice or care to notice that anything is wrong with Bernie.

The fear of murder charges and missing a kick-ass party clouds Larry and Richard’s judgement. So, they do what any rational person would do; they pretend he didn’t die…just for a bit. To add to the zaniness, the woman Richard’s been crushing on, Gwen, is there. He tries his best to get back on her good side after a disastrous date with her the night before.

Later, after the party, Tina, Vito’s girlfriend, shows up drunk and angry, and demands to see Bernie. Of course, she doesn’t notice that he is dead as well, and has sex with him. If she can get a dead guy up, then she is definitely worth killing for!

Conveniently, Marty, another one of Vito’s gang, is out on a stroll on the beach in front of Bernie’s. There, he spots Bernie feeding Tina’s kitty in his room. He calls up Vito to let him know that Paulie failed, and that Bernie is still alive.

The next day, Larry continues on with the lie that Bernie is still alive. Angry. Richard ends the charade by calling the cops, but Gwen’s arrival interrupts him. Richard tells Gwen the truth, but because of all his asinine lies, she doesn’t believe him. Paulie arrives back on the island, and manages to strangle to death the already dead Bernie.

Richard goes back to call the cops, and they hear the playback of Bernie’s call to Paulie. They figure out that Bernie is the one committing the fraud, and he wants them dead. The two find the money that Bernie was going to plant on them, and the confession note. They call the cops, but Ed is out partying, and won’t be back for a while to take the call.

Still thinking that someone is out to kill them, Larry and Richard continue on with the ruse. They take Bernie to his boat, and set sail for home. Unfortunately, they have to return back to the island when the boat runs out of gas. They paddle back to the Hamptons using Bernie as a flotation device.

At Bernie’s place, Gwen shows up again, and Richard tells her the truth about Bernie. This time she believes him after Larry shows her his dead body. Paulie shows up again with a gun, and shoots Bernie several times. He realizes Larry, Richard, and Gwen witnessed the shooting, and chases after them with another gun.

Richard and Gwen go one way while Larry goes another way. Dead Bernie distracts Paulie with a kick to the groin; leaving Larry to tie him up with an extremely long phone cord. Larry then delivers a cartoon-style punch which knocks Paulie to the ground.

The police finally arrive to take care of the crime scene. They arrest Paulie, who’s gone insane from all the attempts to kill Bernie. Paramedics load Bernie into an ambulance, but his gurney rolls down the boardwalk; flinging him onto the beach where Larry, Richard, and Gwen sit. This scares them off; leaving him alone until a boy can bury him in the sand. He will wait there for four years until Weekend at Bernie’s II.