‘What Ever Happened to Baby Jane?’ Movie Summary 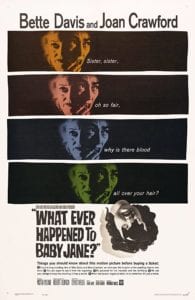 One night, after a drunken party, Blanch’s car crashes into her home’s gates, and she is paralyzed from the waist down. Jane takes the blame for it when she’s found three days later at a motel.

Fast forward nearly 30 years to 1962, and both starlet’s careers have faded. The two sister live together with Jane taking care of her wheelchair-bound sister. Jane is both an alcoholic and mentally ill, and although she takes care of her sister, she’s extremely cruel to Blanche for taking the spotlight away from her.

When Blanche tells Jane that she’s selling the house, Jane goes completely bat-shit crazy. She begins killing small animals to feed to Blanche, and finally commits an actual murder, when she kills her maid, to keep her sister’s abuse from authorities.

Finally, Jane’s illness reverts her to the childhood she so desperately wants to return to. With Blanche, near death, Jane takes her to the beach. Blanche gives a death-bed confession about what really happened the night of the car crash, and Jane happily leaves to get the two some ice cream.

Consumed by her insanity, Jane then dances on the beach before a crowd of onlookers; thinking they are her adoring fans. Two motorcycle cops, who’ve come to arrest Jane for the murder of her maid, spot Blanche lying motionless on the beach. They run to her aid as the movie ends.