The golden lasso is back! After gestating through almost a year of movie release hell, Wonder Woman 1984, the much anticipated follow up to that 2017 DC Comic adaptation smash hit, is out to save the world again! Gal Gadot embodys Diana Prince with style, presence, and accomplished sincerity through limited release in cinemas and in some countries, streaming. (For the record, I watched on a massive V-Max theater experience in Sydney.) Pandemic delays aside, recreating the magic of the first film was always ambitious during a time of potential superhero film burnout.

The film opens on Themyscira—the tropical female-occupied island of Amazonian gladiators. We are engulfed in an Olympics style endurance contest which focuses on a young Diana equally matching her elder competitors through the various physical obstacles; only to falter mentally before abruptly learning a lesson of life in the midst of finishing the contest. This is not only an empowering message for little girls, but the perfect way to start a blockbuster film, and a moment that will come back later as a significant plot point.

We next jump to the wonderful year of 1984. Sadly there is very little nostalgia to embrace other than a few fashion observations and a trip to the mall (of the future) when Diana swings around the food court chasing jewelry thieves and saving children. Since all of the colorful advertisements pushed the retro aspect, I felt the film fell flat in this regard.

During the heist, an artifact called a dreamstone is discovered. It has the ability to grant wishes to those who touch it; including Diana who misses her true love, late WW1 fighter pilot Steve Trevor (Chris Pine). His return is explained reflectively after passing away in the first film, and the opportunity for his fish-out-of-water retro scenes are mildly comedic. This resurrection turns out to be a very smart move due to Pine’s fantastic chemistry with Gadot. Fans will appreciate their shared moment of absolute enchantment as they fly through fireworks. A true comic book inspired color pastiche.

The maniacal Maxwell Lord (Pedro Pascal), a juiced up faux villain, wants the gem so that he may rule the world. He seduces Diana’s clumsy new colleague Barbara Minerva (Kristen Wiig) to obtain the relic. Barbara envys Diana, and it’s her wish is to be more like this wonder woman. As her wish comes true, she tosses aside her glasses, flicks her hair, and transforms into the sleek authoritative apex predator known as Cheetah.

Even though the film runs two and a half hours, the action sequences are sparse with the best one a convoy truck chase which reminded me of a Raiders of the Lost Ark scene. A welcome highlight is the introduction of the much-loved invisible plane, and there’s a very impactful finale with Wonder Woman wearing ancient armor in a battle with Cheetah (although that battle only dazzles to a point, the darkness didn’t help my excitement levels).

WW84 is definitely worth watching. Those looking to escape today’s bleak world will definitely be entertained for a bit. Those smiles will go away though as overall this film will wind up another forgettable superhero mashup. With such a high bar set in the original, the characters and story needed more pizazz.

One more note about the music. Considering the re-imagined Blue Monday is prominent in the film’s trailer, for a movie set in 1984, there was an unacceptable lack of ’80s songs! I counted only ONE featured in the entire duration. Frankie Goes to Hollywood’s Welcome to the Pleasuredome played in the background of a party scene most notable for the spectacular elongated white dress worn by Diana, and that’s it—a huge let down for ’80s fans.

One last shout out to Lindy Hemming’s substantially detailed costume design. It’s Oscar worthy, and do not forget to stick around for a mid-end-credits scene with a welcomed link to early era Wonder Woman. 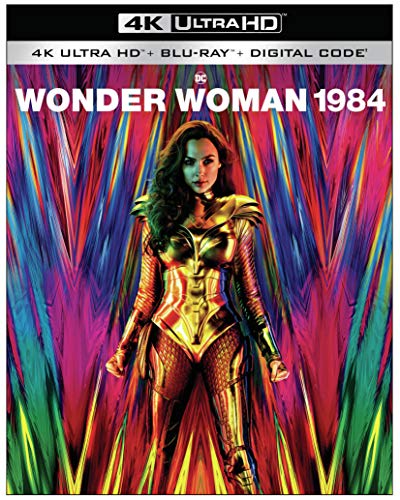