Z for Zachariah takes place in the wake of a nuclear war. A young woman survives on her own, fearing she may actually be the proverbial last woman on earth, until she discovers the most astonishing sight of her life: another human being. A distraught scientist, he’s nearly been driven mad by radiation exposure and his desperate search for others. A fragile, imperative strand of trust connects them. But when a stranger enters the valley, their precarious bond begins to unravel. 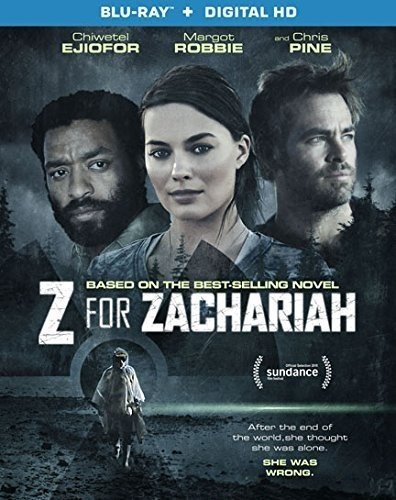 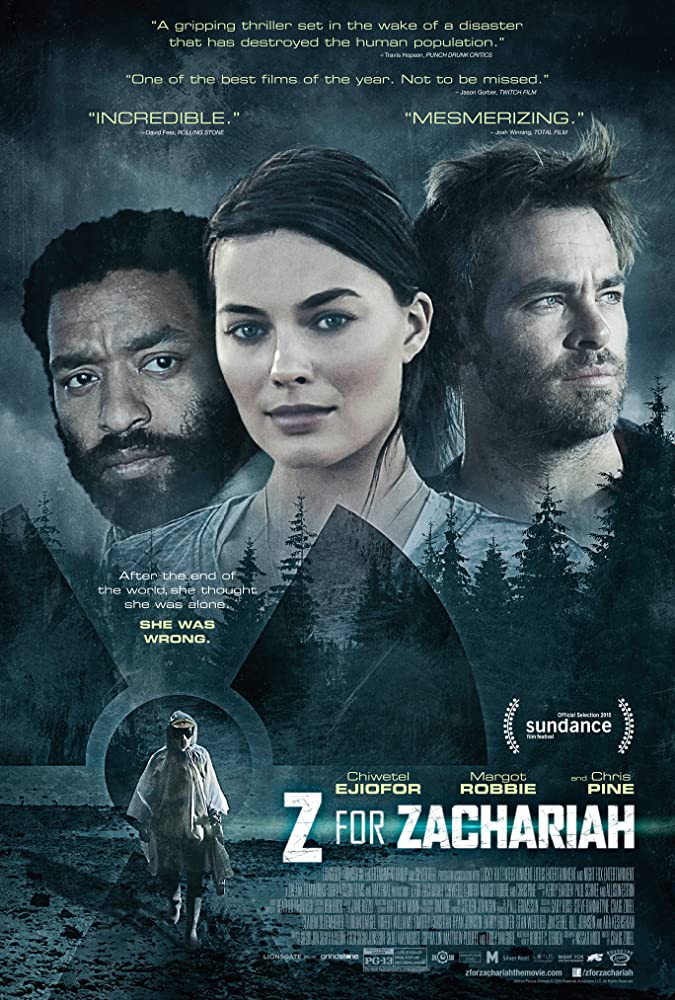 In Z for Zachariah, Ann Burden (Margot Robbie) is a survivor of a nuclear holocaust that has wiped out virtually all of mankind on Earth. She lives on her family farm which is in a valley surrounded by mountains. The valley is protected from the nuclear radiation by the rocky hillsides, favorable weather patterns, and a large ground water supply.

One day Ann encounters the first person that she has seen in months. The man, John Loomis (Chiwetel Ejiofor), is an engineer who has traveled the wasteland looking for a safe place to rest. John has been able to survive the wasteland with the assistance of medicines and a specially designed radiation suit. John inadvertently bathes in a pond that he believes is free from contamination, and Ann runs down to save him. John becomes severely ill, and Ann nurses John back to health at her family home.

John eventually recovers and helps Ann maintain the farm. He helps Ann pump diesel fuel from an abandoned gas station for the tractor so that she can plant crops. Ann tells John that her parents and younger brother left the valley sometime before but never returned. One day, John proposes developing a hydroelectric generator to power the home for the winter. However, John tells Ann that he would need to cannibalize Ann’s family church for the necessary wood. Ann is reluctant due to her deeply held religious beliefs and the fact that her father built the church. John decides not to pursue the project further.

Ann and John grow closer over the next couple of months as they work together. The pair have some occasional disputes related to John’s drinking and Ann’s religious beliefs. Ultimately, Ann attempts to begin a sexual relationship with John, but John tells her that they need more time before taking that step.

One day, Ann is out for a walk and comes across another survivor of the wasteland, Caleb (Chris Pine). Ann is very welcoming of Caleb, but John remains suspicious. Caleb tells them that he was working in a mine when the nuclear holocaust occurred. He survived by staying underground for months, but left when he heard about people living near the coast. Caleb discusses some of the horrors he experienced in the wasteland. John opens up and discusses a young boy he encountered that he left in the wasteland after the boy begged him for death. John later confesses to Ann that he ultimately killed the boy and that he believes that the boy was Ann’s brother, but he is not positive. John questions Caleb’s backstory and is suspicious of Caleb’s true motives. Caleb develops a rapport with Ann due to their religious backgrounds.

Instead of moving on as planned, Caleb decides to remain and help on the farm. He is able to convince Ann to go forward with John’s hydroelectric project and dismantle the church. John becomes jealous of the relationship between Ann and Caleb, and one night, drunkenly gives her permission to pursue the relationship since they are both white. Shortly thereafter, the trio have a celebratory dinner together where John gets drunk again. He awkwardly confesses his love for Ann before passing out in his bed. Later, Ann goes to Caleb’s bedroom where they have sex.

The next day, tensions between Caleb and John continue to escalate. John appears to be aware of Caleb and Ann’s sexual tryst. The two men finish the water-wheel and place it atop the waterfall. Caleb is in the bulky radiation suit while John helps hold him in place with a rope. John saves Caleb when he slips and nearly falls into the radiation pond. Caleb thanks John when he nears the top, but then slips again. John grabs the rope and holds the teetering Caleb in place. The two men lock eyes for a moment before the camera cuts away.

John returns to the farmhouse alone. Ann apologizes to him for having sex with Caleb. John tells her that Caleb decided to leave and head south. Ann is distraught over the news and runs to the edge of the valley looking for Caleb. She does not find him and returns home. She realizes that the house is receiving power from the waterwheel when she hears the refrigerator turn on. Ann plays the church organ back at the barn where she sees that John has set up three pews from the church. John and Ann are awkward with each other, as John sits and watches Ann play a religious hymn.