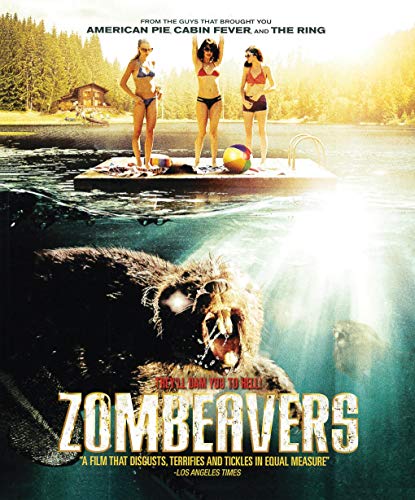 In Zombeavers, after two reckless truck drivers, transporting toxic chemical products, hit a deer on the road, one barrel falls off it. It plops into a nearby river which carries it to a beaver’s dam. College friends Mary, Zoe and Jenn travel to a cabin near the dam that belongs to Mary’s aunt. They soon take a quick swim in the lake where they discover the beaver’s dam. They get out to have a look-see, but a vicious bear finds them first. Luckily, a hunter named Smyth is there to save them.

During the night, their boyfriends Sam, Tommy and Buck show up at the cabin and Mary and Zoe have sex with their respective guy while Jenn argues with her unfaithful one. When Jenn goes to the bathroom, a beaver attacks her. Tommy kills it; thinking it has rabies. The next morning, as the group swims in the lake, more zombeavers show up to attack them. Now the kids are in a fight for their lives.