When Sheriff Jake sees a man at a safe, and the town’s payroll gone, he trails him. Just as he is about to arrest the “thief”, the man named John Carruthers saves his life. Still suspicious, he joins John on his travels, and the two later learn that the town’s leading citizen named Melgrove is trying to take over the area’s ranches. Melgrove wants his gang stop all incoming supply wagons any way possible. With the desperate ranchers about to sell to Melgrove, Jake and John decide bring in life-saving provisions themselves. 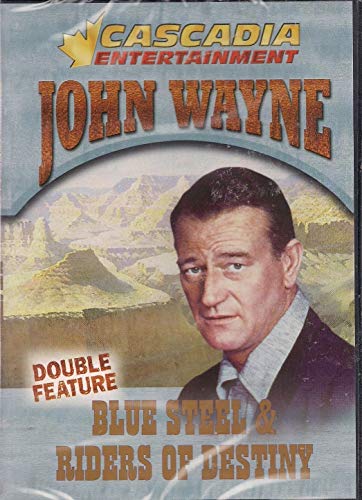 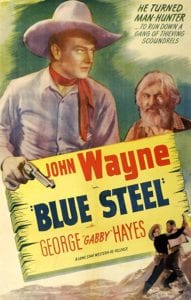 In 1934’s Blue Steel, John Carruthers (John Wayne) is an undercover US Marshal in town to investigate a string of robberies that the Polka Dot Bandit is said to have committed. One such robbery takes place late on a rainy night at an inn where the town’s sheriff, Jake Withers, is staying. Around 1 o’clock in the morning, Hank, the innkeeper hears a ruckus, and he wakes the sheriff. A payroll that the stagecoach driver recently brought in a few hours earlier is suddenly missing from the inn’s safe.

The next morning, Withers does some investigating, and he finds the cabin where Carruthers is staying. Carruthers gets the drop on the sheriff, but doesn’t shoot him. Instead, he invites the old timer to eat with him. Withers accepts the offer even though he’s wary of the stranger.

Soon, at the Yucca City General Store, the local ranchers discuss their options as the outlaws continue to steal their food, money, and local supplies. One of the ranchers, a man named Malgrove, is the mastermind behind the robberies. He plays it like he’s on the rancher’s side…for now.

We cut to the middle of nowhere to find three outlaws getting set to rob Dan Mason, his daughter Betty, and a man named Tom (along with their pack train) on Malgrove’s orders. Danti, their leader, shoots Tom dead. The Masons high tail it out of there before the outlaws kill them too. The outlaws take chase, and shoot at them through the valley.

Back at Carruthers’ abode, Withers gets ready to continue his investigation, but he’s pretty convinced that Carruthers and the Polka Dot Bandit are one in the same. However, he doesn’t arrest Carruthers at this time, but allows him to tag along with him after Carruthers offers to ride with him as, “it’s kind of lonesome trailing alone.”

A gunshot from the outlaws outside the cabin alerts the two to the trouble brewing with the Masons. Danti shoots Dan in the back, and kills him. Carruthers and Withers take chase, and kill one of the outlaws, but Danti manages to shoot Withers. He and his horse fall off a cliff, and then tumble into the water below. Carruthers saves him while Danti, thinking both men are now dead, goes to report the good news to Malgrove.

Back at Malgrove’s ranch, Danti lets him know that Betty got away. So they head back to Yucca City to find her. Betty does make it there, and tells the men that Dan and Tom were killed in an ambush, and the pack train was stolen from them.

Malgrove is now there too, and he consoles Betty, and tells her to stay with him. She, along with the entire town, still does not know Malgrove is the mastermind behind the thefts. Carruthers and Withers are back at the scene of Dan’s murder. While they inspect his body, Malgrove and Danti ride up. All four men return to town with Dan’s body.

While the town looks on, Danti draws his gun on Sheriff Withers and Carruthers. Malgrove accuses them of killing Dan, and stealing the town’s supplies on the pack train. Malgrove turns to the townsfolk to ask them what should be done. As he does, Carruthers quickly draws his gun, and shoots Danti’s gun out of his hand. Carruthers has Betty set Malgrove straight that he and the sheriff didn’t kill her father, but saved her from the outlaws.

Malgrove apologizes, and says the town’s just on edge because outlaws are stealing their food, ammunition, and other valuable supplies. Now, the townsfolk of Yucca City must decide if they can wait for a solution from Sacramento, or flee town to avoid starving to death. Malgrove says he’s got a bit of money, and offers all the owners $100 for their homesteads.

Carruthers thinks they are giving up too easy, and wants one last chance to get the provisions through to the town. Malgrove makes an order for $1000 worth of supplies as a gesture of goodwill. As the men celebrate and bustle around, Carruthers recognizes the spurs on Danti’s boots as the man who robbed the hotel, AKA the Polka Dot Bandit, but he’s not letting on to anyone that he knows yet.

Back at Malgrove’s ranch, Malgrove tells Betty she’s welcome to stay at his place when Danti rides up. As Betty eavesdrops on them, the two men talk about how there’s a vein of gold running through everyone’s ranches, and once they get the land, they will be rich. However, Malgrove catches her spying, so he orders Danti to take her to their hideout for safekeeping until the town is under their control.

Carruthers goes to Malgrove’s to get that order, but it doesn’t look like anyone is home. He does find a bunkhouse, and searches it. There, he finds a match book with the name of the Lost Lode Mining Company in a satchel.

While Carruthers looks around, Malgrove and two of his men look on. He tells the men to do something about it, and they mosey on over to Carruthers. There’s a scuffle where they try to apprehend Carruthers, but he punches out one while Withers shoots the other.

Malgrove shows up and says it’s one big misunderstanding, yet again! Malgrove gives Carruthers the order for the supplies. Carruthers thanks him, and says he and Withers will immediately head out to retrieve it.

First though, Carruthers tails Malgrove to their hideout to spy on them. There, he finds Betty in the strongroom. She tells him all about Malgrove, and his plans to get the gold. Carruthers replies that he will be back, and then returns to Withers to give him a world of news.

The next morning, they do not go to fill the order, but instead head to the outlaw’s hideout. When Malgrove goes into town with most of his men in tow, Withers heads off to take one of Malgrove’s wagons, and Carruthers goes to free Betty. They take Danti hostage, free Betty, and load up the wagon with the supplies they find at Malgrove’s hideout.

Danti frees himself, and rides to Malgrove’s outlaws to tell them he’s been tricked. Everyone then flips a bitch, and heads back to the hideout accept for Danti apparently. Betty spots the men riding in, and alerts Withers who then alerts Carruthers. They take a box of dynamite, as it might come in handy, and then ride out to Yucca City.

The chase is on, and Malgrove’s men nearly catch up. Carruthers uses the dynamite to close off the pass as they get near; blocking Malgrove and his men out. Now, they must swing around, and go the long way. He offers $1000 bucks to any man who can get that girl before she returns to town. Using more dynamite, Carruthers and Withers blow up more rocks at a pass which fly down on Malgrove and his outlaws; killing them.

Carruthers and Withers arrive into Yucca City with the wagon as Betty tells the townsfolk the news about the gold below their land. Carruthers reveals to Betty that he’s the US Marshal the townsfolk have been waiting on from Sacramento, and he’s headed back there. He tells Betty that she’s going with him too as his bride.

The film closes with Carruthers and Betty heading back to Sacramento for a happy ending.