Galaxy Quest is a fictional sci-fi adventure TV series which takes place aboard the intergalactic spaceship the NSEA Protector. Eighteen years after the the network cancels the series, the lead actors can only find work attending sci-fi conventions and electronic store openings dressed as their characters. The cast members pretty much hate each other and wallow in self pity until a race of aliens known as Thermians arrive. These brilliant but innocent beings have mistaken the TV show for reality, and they have built working ships and technology around it as they need the help Galaxy Quest team. The evil warlord General Sarris threatens to take control of their world, and kill them all. Can these old actors pull it together for their greatest performance ever, and save the Thermians from certain death? 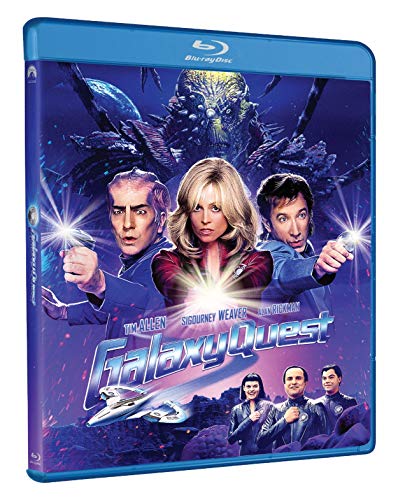 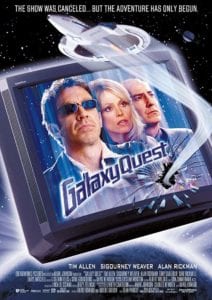 Galaxy Quest is a cancelled fictional TV show where space is the final frontier. One day, at one of their conventions packed full of the usual space geeks, a group of Thermians from the Klaatu Nebula greet Jason Nesmith, the fictional commander of the NSEA Protector.

They are in desperate need of the commander’s help to negotiate peace with Sarris; a lizard-warrior hellbent on destroying the innocent Thermians. Thinking this is just another acting gig, Jason agrees to do what he can to help.  The Thermians take Jason to a fully functional replica of his TV ship; as smart as they are, they are unable to separate fact from fiction.

Jason orders his alien crew to fire at Sarris’ ship. Thinking his acting job is complete, he orders the Thermians to return him home. Once home, he realizes that not only wasn’t he at an acting job, but the aliens were real. Now, Sarris is really angry.   Jason recruits the rest of his TV crew to help him fight Sarris. Also, the Thermians replicated the mysterious Omega 13 from the show’s last episode. The team must keep that away from him too.

Alexander Dane is his ship’s alien science officer. Fred Kwan is the chief engineer. Gwen DeMarco is the computer officer, and Tommy Webber the ship’s now grown up child pilot. Throw in Guy Fleegman, the red shirt who played an unnamed security officer that died in one episode, and you have no help for the hapless Thermians!   Along the way, the space actors somehow manage to fit into their roles, and fight off Sarris and his henchmen…saving the Thermians, but they needed a lot of help from those space geeks at the convention to do it.

With the Galaxy saved, the television execs revived their show as the sequel series Galaxy Quest: The Journey Continues. The entire crew returns, even Guy Fleegman.

User Rating: Be the first one !
May 16, 2019
2 minutes read
Show More
Back to top button
Close
Close