Hard Ticket to Hawaii begins when a drug cartel murders two police officers on a private Hawaiian island. On another island, Agency agents, Donna and Taryn, stumble upon a delivery of diamonds intended for the drug lord Seth Romero. It’s his cartel that has just killed the officers, and now he’s ready to kill the girls to get them back! Soon other Agency operatives are called in to take down Romero, the cartel, and a horrendously toxic snake! 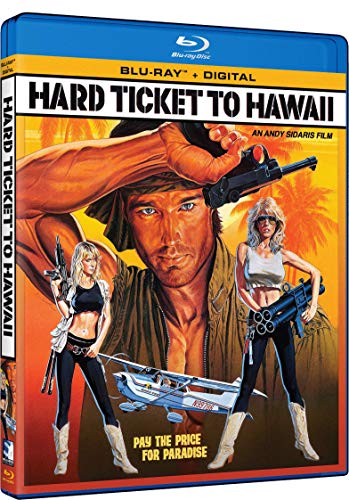 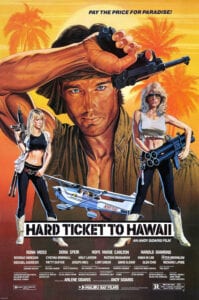 On Molokai in Hawaii, the shady drug kingpin Mr Chang and local distributor Seth Romero have established a profitable criminal business. We witness their dirty work first hand when their cronies murder some Molokai police officers who see a little too much of their dealings.

Next we meet the sexy drug enforcement secret agent Donna and her even more beautiful civilian partner Taryn. They fly two honeymooners (and a toxic snake) from Honolulu to Molokai via an 80s montage. It’s very scenic.

Trouble begins for the girls when they land at their destination. While they take the honeymooners to their campsite, the Honolulu airport tries to make contact with them to let them know they have the wrong snake. It does not get through to the girls.

Off the coast, Mr Chang sends a remote control helicopter from his boat to where the girls have landed their tiny plane. The girls spot it, and see two silver boxes inside it. They take the boxes out, but drop one when Seth’s henchmen arrive for the delivery, and attack them. They manage to fight off the guys, and fly away to their own camp where they head for the jacuzzi.

Next we have a change of venue at Edy’s restaurant where Ashley the manager sexually harasses Charolette on her way to meet with the slimy TV director, Whitey. Seth’s men show up to tell Seth the bad news that they do not have the boxes from the helicopter. Seth orders some other thugs to get them back.

While topless in the jacuzzi, Donna and Taryn examine one of the boxes they were able to retrieve, and find expensive diamonds inside. That night Seth’s two goons break in to the girl’s place, and cut the phone line. Then, they separate and grab Taryn and Donna while demanding the diamonds. The toxic snake is hanging out there, and it manages to escape when the fight between Seth’s gang breaks open his crate.

The masked attackers manage to get their hands on the one box of diamonds, and demand the other one, but when Seth spots the snake, he freaks out and the gang leaves. Donna manages to shoot Seth in the face as they flee.

The girls pretty themselves up afterwards, and head to Edy’s where Ashley the manager sexually harasses them. They meet with the restart owner and agency contact, Edy. She gets them in touch with Rowdy Abilene and Jade, and they agree to head to the island to help the girls. Meanwhile Taryn leave to schtoop J.J. Jackson on the beach as the toxic snake prowls free along coast.

Rowdy and Jade find themselves under attack upon arrival. A skateboarding thug with a blowup doll shoots Jade, and Rowdy blows him up with a bazooka. We next see the honeymooners on the island taking pictures, and the snake attacks and kills them.

Rowdy calls Edy where he tells her that they were attacked. She runs off to the hospital to pick them up. The henchmen tail her on the way, and cut her off. They grab her and throw her into their blue rape van.

We then find Donna and Taryn doing surveillance at the beach outside Seth’s compound. A helicopter arrives, and Seth gets out. To the girl’s surprise, Seth greets the henchmen who have Edy all tied up. The girls run off to find Rowdy and Jade for help.

However, they first find the honeymooners dead at their campsite, and a snake selfie stuck in their Polaroid. Back at Edy’s Rowdy and Jade show up, and Ashley the manager gives them a message from Donna to head to their place. Finally, the four are together and they plan to rescue Edy from Seth’s gang. Rowdy has a plan, but first, he takes time to grind the sand out of Donna’s organ Donna.

Back at Seth’s compound, Chang’s guard tries to get information out of Edy over the whereabouts of the other box of diamonds. Seth calls Mr Chang, and Chang orders more drugs. Chang tells Seth to kill all the agents that get in their way.

The next morning, Rowdy follows local hardbody, Coleen, on the beach to the compound where Seth’s guard, Shades, tells Rowdy to split. The two play catch with a frisbee, and Rowdy kills Shades with one full of razor blades on it.

He then calls in Jade, Donna, and Taryn in for backup, and they attack the compound to save Edy. A gunfight ensues. Many of Seth’s men die, and they save Edy.

Victorious, they return home. That night when Donna is alone, Seth arrives and attacks her. Donna harpoons him, and kicks his ass until he’s dead… or is he? While Donna recovers from the attack, Seth pops up, and tries on last time to kill her. She stabs him in the stomach, and runs off. He’s dead this time…or is he?

Donna retreats to the bathroom to clean up a bit. The snake pops out of the toilet and attacks her. She runs away in time for Seth to come at her again. The snake kills Seth dead…or does he? Yep! The snake finally got him. Donna then shoots the snake a few times, and Rowdy bursts through the wall on a motorcycle, and uses his bazooka to blow up the snake.

Donna is safe, so that just leaves Mr Chang to die in an epic battle. The last stop on the tour is Mr Chang’s luxurious penthouse. Jade, Taryn, Edy, and J.J. Jackson wait down in the car while Rowdy and Donna beat a guard down and take out Chang. Donna shoots him, and he falls out the window to his death.

Everyone is all smiles, and we sail off into the sunset on the Malibu Express—cue one last 80s montage with lots of boobs!