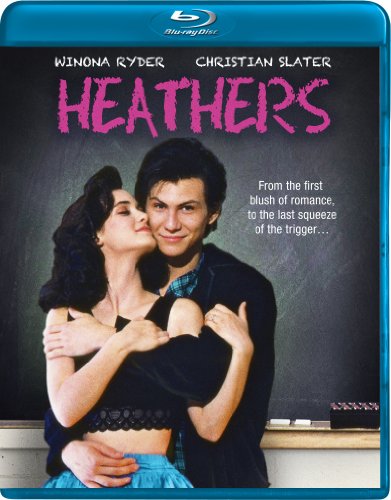 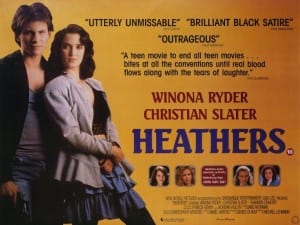 In the 1980s, teenage angst was defined by movies like ‘Pretty in Pink’, ‘Fast Times at Ridgemont High’, ‘Ferris Bueller’s Day Off’, and the ‘Breakfast Club’. For the most part, these movies were light-hearted comedies that sprinkled in a small dose of teen issues that many children of the 80s could relate to. By the end of the decade, the grunge scene was brewing and attitudes were changing. From this new perspective came a dark comedy; a twisted tale of love, murder, suicide, and the desire to be accepted. Welcome to the world of Heathers.

The story starts out with three best friends whom hate each other: Heather Red, Heather Green, and Heather Yellow. They are the popular people that girls want to be and boys want to be with. Heather Red is the queen bitch that pushes the other Heathers to do her evil, like tricking the fattest girl in school into thinking the hottest jock is hot for her or asking her fellow classmates nonsensical survey questions at lunchtime.

The newest addition to the Heathers is Veronica Blue, an intelligent diary writer played by Winona Ryder. Veronica Blue isn’t fully buying into what Heather Red is selling, but desires popularity by any means possible. During a lunchtime Q & A, Veronica meets J.D. Black played by Christian Slater. J.D. is a screwed up kid who watched his mother commit suicide in order to escape her vile husband. J.D. was then raised by him and forced to travel from town to town. Maybe they moved because of work. Maybe it was because they were laying low from his dad’s criminal tendencies. The movie isn’t clear, but one thin is for certain, Veronica Blue falls head over heels for J.D.

Of course, our stereotypical football jocks, Ram Romo and his butt buddy in crime, Kurt, don’t like this one bit and decide to have some fun with J.D. They call him a fag and threaten to kick his ass, but these two asshole lovers don’t intimidate J.D. This is a man-child used to eating breakfast 300 yards away from 4,000 Cubans trained to kill him. Instead, J.D. pulls out a gun and fires blanks at them. For those of you not paying attention, he pulls out a gun and fires blanks at two students inside of a high school.

Were the cops called? Nope! Was J.D. Black expelled? Not a chance. Did the teachers get together during their afternoon smoke break and decide that to make poor J.D. sit out of classes for a few days? Yes they did. Makes perfect sense, doesn’t it? This movie should have ended right there, but we have another one hour and twenty-five minutes to fill, so set the boy free and make him a hero! We’ve got some Columbine kids to inspire.

Anyway, later that night, Heather Red takes Veronica to a lame frat party where Heather Red gives one lucky guy a quick BJ, but then gets mad a Veronica because she refuses to put out like a big girl. Heather Red vows to ruin Veronica’s reputation at school the next day, so after a thorough fucking by the maniacal J.D. Black, the two sneak into Heather Red’s house and kill her with a Blue potion, then make it look like a suicide. In death, Heather Red becomes even more popular at school when her sensationalized suicide is made out to be the final act of a misunderstood girl.

The killings continue a few days later when Veronica and J.D. kill the two jocks, Kurt and Ram, in their Blue underwear and make it look like a double suicide between two gay lovers. Their sensationalized suicide pact makes them out to be misunderstood homosexuals in a straight sport’s world – just like Eli and Peyton. This inspires the fattest girl in school, Martha Dumptruck, to commit suicide to finally gain the popularity she so desires, but she screws it up and survives.

Her mother, Fanny Forklift, must have been devastated. Heather Yellow next follows suit when she tries to kill herself after Heather Green, who has now replaced the evil Heather Red, tells the whole school about her calling in on a radio program to discuss her depressed life. This Heather takes as many sleeping pills as she can fit into her mouth, but Veronica swoops in from the blue and stops her.

Veronica finally comes to her senses and she dumps J.D. Black. He goes to her house to kill her but finds Veronica hanging from a noose. Thinking she’s dead, he tells her his plot to blow up the school and make it look like one big suicide. If you’re going to have a big suicide then you need a big suicide note and J.D. gets one. He convinces Heather Green to get the whole school to sign a fake petition which turns out to be that note.

The next day, J.D. places several explosive devices in pseudo-plain sight under some very exposed bleachers. Veronica confronts J.D. down stairs in the boiler room were he is planting the main bomb that will bring the house down during the weekly school pep rally. Veronica manages to wrestle the gun from J.D. and while he is cinematically draped in blue light, Veronica shoots off his middle finger to the world. She makes J.D. turn off the timer to the bomb which he eventually does with four seconds to spare; the four seconds of course being a metaphor for the four suicides that occurred at his hands – the last one being his own.

J.D. ends his black life in the parking lot in front of the school with one last bomb that is taped to his body. The movie ends with a blossoming lesbian affair between Veronica Blue and Martha Dumptruck.

Indiana Jones and the Kingdom of the Crystal Skull (2008)

Indiana Jones and the Kingdom of the Crystal Skull (2008)