Dick Wallace is a young playboy who prefers wine and women to honest work. When his overbearing father forces him to work as his company’s collection manager, Dick travels to a small, rural town to collect a debt from a down-on-his-luck minister. There, he falls in love with the minister’s daughter, Marion. Unfortunately, Dick’s father is determined to put an end to their budding romance, so Marion takes a job working at the family company to prove her worth. 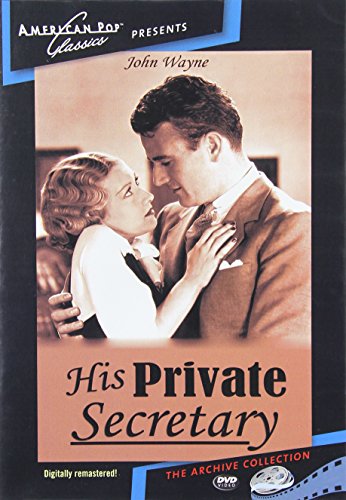 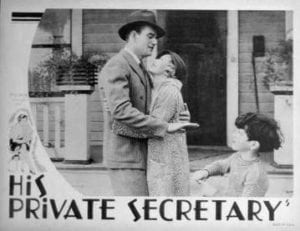 His Private Secretary begins with the spoiled playboy, Richard Wallace (John Wayne), coming home drunk. His grumpy father gives him a job in his business in an attempt to get him to grow up. On his first day, Richard sets out to a small town where he meets a preacher’s daughter named Marion.

Richard pursues Marion and marries her without his father’s knowledge or blessing. When Richard finally returns home, he tries to tell his father he’s married to a wonderful woman, but his dad insists he end it, or he will be disinherited.

Marion lands a job working as Richard’s father’s secretary, but he doesn’t know she’s Richard’s wife. Marion ends up proving herself to Mr. Wallace, but Richard screws things up when Marion finds Richard drunk in a state of undress and assumes he’s had a fling with Polly.

Richard tells his father the truth about Marion, and that he lost her. Richard begins working for his father, and proves to Marion he’s a changed man. When he rejects Polly, Marion reconciles with him while his father happily looks on.