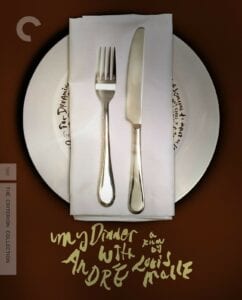 ‘My Dinner with Andre’ Criterion Summary

In this captivating and philosophical film directed by Louis Malle, actor and playwright Wallace Shawn sits down with his friend the theater director André Gregory at a restaurant on New York’s Upper West Side, and the pair proceed through an alternately whimsical and despairing confessional about love, death, money, and all the superstition in between. Playing variations on their own New York–honed personas, Shawn and Gregory, who also cowrote the screenplay, dive in with introspective intellectual gusto, and Malle captures it all with a delicate, artful detachment. A fascinating freeze-frame of cosmopolitan culture, My Dinner with André remains a unique work in cinema history.

My Dinner with Andre is a pretentious bore explaining the meaning of life with no meaning.

I had always heard how amazing this film was from every critic and pseudo-intellectual I came across while in college. It rented all the time at our video store. My Dinner with Andre was considered by Siskel and Ebert to be one of the greatest movies of all-time. BOTH of them said they wished Hollywood would put out many, many more similar movies. I can’t tell you how excited I was waiting for the Criterion DVD to arrive this week for this “masterpiece”…

I’ve never been a fan of Hollywood’s elite choosing what should and shouldn’t be made into a movie. The mind-numbing trash Hollywood is putting out today in straight-to-video quality of writing and visuals is overwhelming. But whatever powers that be chose to never make another movie about two dull, middle-aged, marginally-talented (Wallace at least) Broadway wannabes talking existential nonsense for TWO HOURS while we watch them eat…. THANK YOU FOR NOT MAKING ANOTHER MOVIE LIKE THIS!!!!

There’s a reason Louis Malle worked on almost no budget to create this. Put three cameras in a restaurant and tell two guys to talk about whatever comes into your brain. No point. No direction. No rest for my ears. It’s just Andre talking and talking and talking and talking… I mean NON-STOP. I tuned out in the first 15 minutes and never found my footing again. It was like listening to white noise when you go to sleep – you know there’s something happening in front and around you, but you couldn’t care less what it is and eventually you just fall asleep through the incessant racket. Welcome to My Dinner with Andre.

I know there is supposed to be some higher meaning that my dimwitted brain cannot grasp that superior intellects will look down their collective noses at me and shout, “See! THIS is art! And you’re too thick to grasp the overall nuances of this masterpiece.” Okay, here’s my dilemma… Explain to me how watching two guys talk – about nothing really interesting or tangible btw – is entertaining. They (or, to be more precise, Andre) talks about existentialism, nipple-suckling teddy bears in Poland, Tibetan stories that make no logical sense… and I’m an idiot for getting to the end and saying, “That’s it?”

Movies are entertainment. I get more entertainment watching carefree school children playing any sport for two hours. Sitting in an abandoned schoolhouse in the middle of the Peru rainforest singing an English hymn, only to be surrounded by Spanish singing villagers creating a choir of angelic proportions. Hiking for two hours into the forest or along a beach where the only noise I hear is the wind blowing, or waves crashing, or branches rustling… that’s entertainment too. But it does not make a two hour Hollywood movie.

I am starting to question what qualifies as an “important movie” in the Criterion Collection. If this movie is art, I’ll steer clear of future Criterion movies and find something better to do with my time. Come on, Criterion. Do a revival of Buster Keaton’s The General. Do a first-class Blu Ray of Cinema Paradiso. Find a long-lost noir from the 1940s like Nightmare Alley that deserves to be rediscovered. But a two-hour film about two full-of-themselves playwrights talking about a fantasy world that only they inhabit??? Worthless waste of time.

Wally Shawn: LOVE you when you act in a proper movie. Not in this garbage. Sorry. It only gets a 2 out of 10 because Wally is an awesome human being. No other reason.