In No Time To Die, Bond has left active service and is enjoying a tranquil life in Jamaica. His peace is short-lived when his old friend Felix Leiter from the CIA turns up asking for help. The mission to rescue a kidnapped scientist turns out to be far more treacherous than expected, leading Bond onto the trail of a mysterious villain armed with a dangerous new technology. 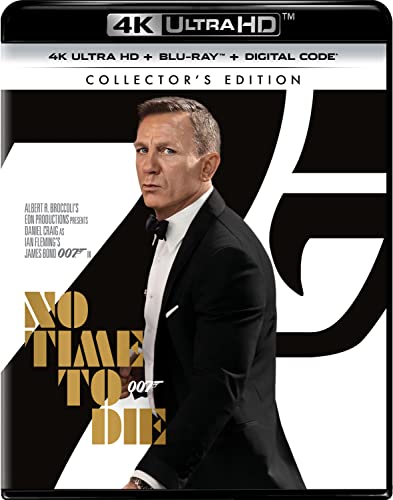 ‘No Time to Die’ Movie Summary No Time to Die begins with Lyutsifer Safin (Rami Malek) showing up at the home of a young Madeleine Swann (Coline Defaud) and her mother (Mathilde Bourbin) in Norway. He’s there to kill her father, Mr. White, but he’s not home. Instead, Safin kills Madeleine’s mother as Madeleine looks on from her room, and then she hides from him. When Safin goes looking for Madeleine, she shoots him. She drags him out of the house and into the snow only to find he’s still alive. Madeleine tires to escape onto the nearby lake which has frozen over, but she falls through the ice. Safin rescues her.

Years pass to shortly after the events of Spectre. We find Madeleine in Matera with James Bond (Daniel Craig). When Bond takes a moment out of their romantic getaway to visit Vesper Lynd’s tomb, Spectre assassin Primo (Dali Benssalah) detonates it. Bond survives the blast, chokes out Primo, and returns to Madeleine, thinking she betrayed him. He takes her to the train station where they flee more agents. Bond then places Madeleine on a train; destination: out of his life.

Five more years pass, and we see MI6 scientist Valdo Obruchev (David Dencik) working at a MI6 super-secret laboratory. Spectre agents kidnap Obruchev and kill the other MI6 scientists. Obruchev has been working on a secret project M (Ralph Fiennes) has developed called Project Heracles. It’s a bioweapon made of nanobots that infects humans like a virus, but they only kill people (and their biological family) whose DNA is programmed into them.

At this point, Bond’s a retired man living in Jamaica, but that peacefulness is broken one morning when CIA agent Felix Leiter (Jeffrey Wright) with his new partner, Logan Ash (Billy Magnussen) arrive to the island. Leiter needs help tracking down Obruchev, but of course, Bond says no. As Bond leaves the club, he finds his Land Rovers won’t start, which is typical of 99.9% of all these vehicles ever made. Luckily for him, a local woman named Nomi (Lashana Lynch) gives him a ride home. She’s actually a MI6 agent who now uses the 007 moniker, and when she tells Bond about Project Heracles (and also tells him to stay out of her business), Bond calls Leiter and agrees to help him.

Cut to Cuba where Bond meets CIA agent, Paloma (Ana de Armas). Bond and Paloma infiltrate a party being held in honor of Blofeld’s birthday. They have is on good authority Obruchev is there and they are to retrieve him. They quicly learn the room is full of Spectre’s top brass and absolutely none of them recognize Blofeld’s arch enemy.

Blofeld isn’t at the party though. He’s in solitary confinement in a MI6 prison in England. He is there in spirit, communicating via a bionic eye. He knows Bond will be there, and orders Primo (who survived Matera) to kill Bond with the nanobots. However, Obruchev and Primo are really working for Safin and Safin has a grudge against Spectre for killing his family when he was a boy. He has Obruchev program the nanobots kill all of Spectre instead. The plan goes off without a hitch and now Blofeld is the last remaining Spectre agent alive.

Paloma spots Obruchev fleeing the party, and Bond captures him. Nomi shows up and steals Obruchev but Bond steals him back and then flies him to the rendezvous point with Leiter and Ash on a boat in the Gulf Coast. Unfortunately, Ash is a double agent working for Safin. He shoots Leiter, escapes with Obruchev, and then blows up the boat with Leiter and Bond on it. Leiter dies in the sinking ship as Bond escapes. Don’t worry though, Leiter is a host who’s very important to the Westworld storyline so he will be back someday.

We next go to London where Moneypenny (Naomie Harris) takes Bond to Q’s (Ben Whishaw) flat to have him decode a flash drive Bond took from Obruchev. They then arrange a meeting between Bond and Blofeld in prison to locate Obruchev. Before this meeting takes place, Safin pays Madeleine a visit where he reveals he was the man who killed her mother and saved her from the frozen lake when she was a child. Because she is Blofeld’s therapist who has access to him in prison and because Safin wants Blofeld dead as the last remaining Spectre agent, he coerces Madeleine to infect herself with nanobots coded to kill Blofeld.

Bond and Madeleine reunite after these long years at Blofeld’s prison cell—very romantic and very awkward. However, when Bond touches Madeleine, he unknowingly infects himself with the nanobots. Madeleine gets cold feet as she doesn’t want to kill Blofeld and leaves.

Bond then interrogates Blofeld alone. There, Blofeld admits he staged the ambush at Vesper’s tomb so Bond would think Madeline betrayed him. Bond snaps a bit and chokes Blofeld. Although he stops himself, Safin’s nanobots on Bonds hand spread to Blofeld and kill him.

Next up, Bond heads to Norway where Madeleine still lives in her childhood home. Bond’s surprised to meet Madeleine’s five-year-old daughter, Mathilde (Lisa-Dorah Sonnet). While Madeleine claims the little girl is not his, she has Bond’s same blue eyes. He knows. Safin knows. We all knows.

Madeleine comes clean and reveals that he father killed Safin’s parents on Blofeld’s orders when Safin was a wee boy. This was his sole purpose for seeking revenge on Blofeld and Spectre. However, Safin isn’t satisfied with just ridding the world of Spectre. He, Ash, and many, many goons arrive to capture Bond, Madeleine and Mathilde. Bond kills Ash For Your Eyes Only style and most of Safin’s goons, but they were just a distraction for Safin to nab Madeleine and Mathilde without incident.

Bond takes a picture of the island Madeleine says is Safin’s evil island lair to Q who locates it. It’s on an old World War II base tucked away on an island between Japan and Russia. Bond and Nomi infiltrate Safin’s evil island lair only to learn Safin has converted it into a nanobot factory, and Obruchev has created millions of nanobots to unleash globally. The death of possibly billions of innocent people will bring forth a New World Order which Safin will lead as he doesn’t have to worry about the little robots killing him or family as he’s the last one in his DNA line.

While Bond heads out to find Madeleine and Mathilde, killing many of Safin’s men, Nomi pushes Obruchev into a large pool of un-programmed nanobots, killing him. Of course Bond rescues Madeleine and Mathilde. He puts them on an inflatable boat with Nomi who takes them to safety away from the island while he stays behind to open the silo doors on the base. This will enable a British missile strike from the nearby HMS Dragon to take out the whole stinkin’ factory.

Bond kills Safin’s remaining men on his way to the control room. He opens the silos and heads off to escape before the missiles hit. However, Safin is still there, and he closes the silos again, finds Bond, and shoots him. A fight ensues where Bond breaks Safin’s arm and Safin breaks a vial of nanobots over Bond’s face which are programmed with Madeleine’s DNA., rendering Bond unable to ever touch Madeleine and Mathilde ever again lest he kill them.

Bond shoots and kills Safin and opens the silos yet again. Realizing he’s doomed whether he survives or not, Bond radios to Q so that he may talk to Madeleine one last time. Bond tells her he loves her and wants her to move on without him. Madeleine tells Bond Mathilde is his daughter and the two say their final goodbyes.

Bond stands tall a top the control room as the missiles hit their targets on the island, destroying the nanobot factory and Bond.

Later at MI6, M, Moneypenny, Q, Tanner (Rory Kinnear), and Nomi drink Scotch in Bond’s honor. The film ends with Madeleine driving to Matera with Mathilde as she tells her daughter about a man named Bond, James Bond.