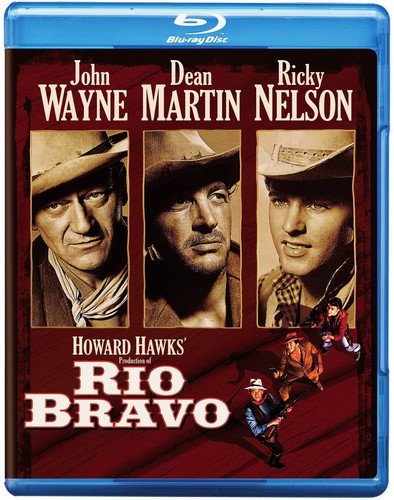 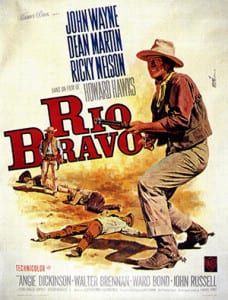 Rio Bravo begins with local Borrachón, Dude, stumbles into a surly saloon in Rio Bravo, Texas. He gets into a fight with Joe Burdette; the worthless brother of a big time cattle rancher named Nathan. During the altercation, Dude knocks out Sheriff John Chance (John Wayne), and Joe begins punching Dude. When a man tries to stop the fight between the two, Joe shoots him dead.

After Chance comes to, he goes to the saloon next door to arrest Joe for murder. As he’s doing this, one of Joe’s buddies pulls a gun on Chance, but Dude shoots it out of his hand. Chance deputizes Dude on the condition that he stays sober. They take Joe straight to jail until the U.S. Marshal can arrive.

Once at the jail, Stumpy, who holds a grudge against Joe’s brother, Nathan, guards Joe. However, Joe warns Chance and Stumpy that his brother won’t take too kindly to his capture, but the men don’t cave into his threat.

Meanwhile, a sexy woman named Feathers comes to town and rents a room at the hotel. The hotel owner, Carlos, is up in arms that Sheriff Chance’s friend, Pat Wheeler, is talking too much about the sheriff needing help. Chance finds Wheeler at the saloon, and asks him to shut his yapper. Wheeler offers one of his own henchmen, Colorado, as help, but Colorado just wants to mind his own business.

As this is going on, Feathers is whipping everyone in poker, and leaves before anyone can win their money back. When three aces wind up missing from the deck, Chance confronts Feather in her room. He shows her a handbill from a nearby town with her image on it saying she’s a wanted for…card cheating. Colorado then interrupts and tells Chance it’s another guy doing the cheating, and it turns out that Colorado is right, but Chance isn’t going to say he’s sorry to Feathers for doing his job.

Wheeler leaves the saloon to go back to the hotel, but one of Burdette’s men shoots and kills him. Now, Colorado wants to help Chance, but Chance refuses his help. Chance and Dude chase the shooter into another saloon, but not before Dude is able to nick the guy with a bullet. Believing their man has muddy boots and a bloody disposition, Chance and Dude make everyone remove their guns, and show them their feet. After no luck from their line of questioning, Dude notices blood dripping from above, and then shoots their suspect who is watching from the stairs above.

Chance goes back to the hotel for a little R & R, and unknowingly gets a bodyguard at his door overnight in the form of the sultry Feathers. That morning, Chance tells Feathers to get on the next stagecoach out of town, but she doesn’t leave. Dude is out guarding the town’s entrance; having everyone check their guns at the first gate. Nathan Burdette shows up to see his brother, but ends up leaving town empty handed. On his way out though, he pays a band to play the Mexican bugle march – El Degüello – Spanish for slit throat, and implying that Nathan will soon show no mercy.

In the morning, someone jumps Dude, and hog ties him in a barn at the entrance of town. Burdette sneaks armed men into town, and nearly kills Chance, but Colorado kills two of them as he tosses Chance his rifle. Three of Burdette’s men die in the altercation.

They rescue Dude, and he’s ready to call it quits from a case of the shakes. Soon, a sound of haunting music pierces the air, he decides against quitting. Unfortunately, as he and Chance go to Carlos’ hotel to pick up supplies, more of Burdette’s men capture the two. They force Chance to go to the jail to release Joe, while a few more Burdette men stay behind with Dude. Thinking Stumpy is the only one at the jail, Colorado is able to surprise the men, and Chance, Colorado, and Stumpy secure the jail again.

Now at a stalemate, Chance accepts Nathan’s offer for a trade…Dude for Joe. Chance agrees, but during the exchange, a big gunfight ensues. They kill or capture all of Burdette’s men. Nathan surrenders, and they toss him into the jail cell with Joe.

Back at the hotel, Feathers is scantily dressed…a scantily as one can be in a 1950’s movie…and ready for the Sheriff to come take her away to wherever he pleases. We cut to the street where part of Feather’s outfit floats to the ground. Stumpy retrieves it, and he and Dude walk on down the street.