Attack of the Clones begins ten years after the events of the Phantom Menace. Padmé Amidala is now a Senator for her planet of Naboo. After Count Dooku has his separatist group try to assassinate her, the Jedi reveal that there are not enough of them to defend the Republic against the new threat. Meanwhile, Chancellor Palpatine has secretly recruited Jango Fett to be the source of a clone army to protect the galaxy. As Obi-Wan Kenobi continues to train the young Anakin Skywalker in the Jedi ways, he finds that he’s taking just as many steps down the path of the Dark side. 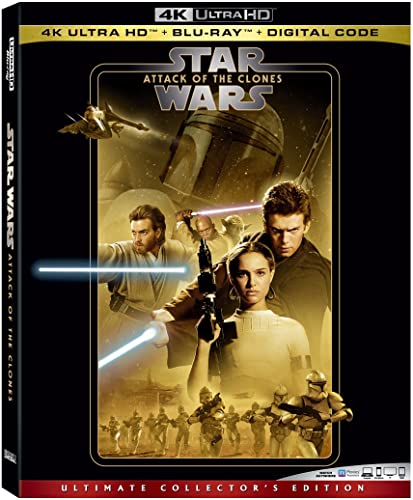 ‘Attack of the Clones’ Movie Summary 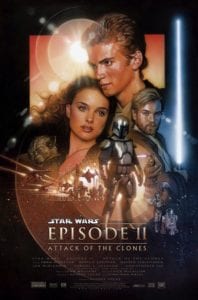 A decade has passed since the events of The Phantom Menace. Jedi Master, Count Dooku (Christopher Lee), leads a separatist movement against the Republic. Former Queen of Naboo and current Senator, Padmé Amidala (Natalie Portman) returns to Coruscant to vote against the creation of an Army of the Republic in the Galactic Senate.

Upon landing, there is an attempt on her life when a bomb onboard her ship explodes. Chancellor Palpatine (Ian McDiarmid) requests the Jedi place her under the protection of Jedi Knight Obi-Wan Kenobi (Ewan McGregor) and his apprentice, Anakin Skywalker (Hayden Christensen). On their first night protecting her, the bounty hunter, Zam Wesell (Leeanna Walsman), tries to assassinate Padmé, but when Zam’s attempt goes awry, someone kills her as Obi-Wan and Anakin press her for information.

The Jedi Council tasks Obi-Wan to find Zam’s murderer, and they also have Anakin escort Padmé back to Naboo. Anakin, who has become increasingly frustrated with Obi-Wan’s tutelage, relishes the opportunity to have alone time with Padmé. Her representative, Jar Jar Binks (Ahmed Best) steps in to assume Padmé’s Senatorial duties while gone.

The watery planet of Kamino

Obi-Wan’s investigation takes him to the planet of Kamino where he learns that a Jedi Master named Sifo-Dyas ordered a secret clone army for the Republic some ten years ago. This come as a surprise to Obi-Wan as the Jedi Council believe Sifo-Dyas to have been killed around that same time.

The Kaminoans introduce Obi-Wan to their donor for the clones, a bounty hunter named Jango Fett (Temuera Morrison). Obi-Wan believes Jango to be Zam’s killer that he’s looking for, and after an unsuccessful attempt to arrest him, Obi-Wan tosses a tracking device on his ship that allows him to track Jango to the planet of Geonosis.

Back on Naboo, Anakin professes his hate of sand, and his love for Padmé. However, she replies that it would be impossible for a Senator and a Jedi to marry as attachment is forbidden.

At the same time, Anakin has troubling dreams that his mother, Shmi (Pernilla August) is in pain. He and Padmé return to Tatooine where Anakin learns that his mother was sold to a moisture farmer outside of Mos Esley. Anakin and Padame go to the Lars homestead where he meets Shmi’s husband, Cliegg (Jack Thompson); his son Owen (Joel Edgerton), and Owen’s fiancee Beru (Bonnie Piesse).

Kleg relays to Anakin that a month ago, Tusken Raiders took Shmi, and he was unable to rescue her from them. Enraged, Anakin uses the force to track her to a Tusken camp, where she dies in his arms. In one of his biggest steps to the dark side thus far, Anakin slaughters the entire Tusken community; women and children included. Anakin brings his mother’s body back to the farm for a small funeral.

On Geonosis, Obi-Wan finds Count Dooku and Trade Federation’s Vicroy, Nute Gunray (Silas Carson), have built a large droid army. He also learns that Gunray is behind the assassination attempts on Padmé for revenge on foiling his plans on Naboo years earlier. Obi-Wan send his findings to Anakin, who then forwards them to the Jedi Council on Coruscant, before being captured himself. Once the Council learns of Dooku’s army, Mace Windu (Samuel L. Jackson) leads a group of Jedi to Geonosis to stop it.

As this is going on, Jar Jar Binks goes to the Galactic Senate to request they give Chancellor Palpatine emergency powers. Once they agree, the Chancellor is able to call the “recently discovered” clone army into battle.

The Jedi come to Obi-Wan’s aid

We head back to Geonosis, where Count Dooku tries to persuade Obi-Wan to join him. He reveals that a powerful Sith Lord named Darth Sidious secretly controls the Senate, but Obi-Wan doesn’t believe him. The Jedi would know if that’s the case.

Anakin and Padmé next head to Geonosis to help rescue Obi-Wan, but they are captured in a droid factory. They are reunited with Obi-Wan in a large arena where they are to battle three fearsome creatures to the death.

As they fight for their lives, Mace Windu arrives with the Jedi to take on the droid army. As it looks like Count Dooku has the upper hand, Yoda (Frank Oz) swoops in with the Republic’s new clone army, and they take on the Separatists directly.

Count Dooku attempts to escape, and Obi-Wan and Anakin track him to his hangar. There, they take him on when Dooku refuses come with them peacefully. Dooku manages to injure Obi-Wan’s leg, and cut off Anakin’s right arm. Before he can take out both Jedi for good, Yoda arrives and engages on Dooku in lightsaber duel.

Unable to defeat Yoda, Dooku forces a support pylon to fall on Anakin and Obi-Wan. Yoda uses the Force to to block the pylon; allowing Dooku to escape in his solar sailer with the plans for a new weapon called the Death Star.

Everything proceeds as planned

Dooku lands in a deserted industrial district on Coruscant where he meets with his master, Darth Sidious. Referring to Dooku as Darth Tyranus, Sidious informs him that everything is proceeding as planned.

Back home on Coruscant, Obi-Wan tells the Jedi Council that Darth Sidious is controlling the Galactic Senate. While none of them believe this, Yoda and Windu agree that the Dark Side now clouds everything, and they now must closely monitor the entire Senatorial body.

From a balcony filled with Jedi and Senators, Palpatine gleefully watches the launch of the massive clone trooper army. The Clone Wars have begun—much to the chagrin of Senator Bail Organa (Jimmy Smits).

On Naboo, Anakin quietly marries Padmé in secret with only C-3PO and R2-D2 as witnesses.

Twentieth Century Fox released Attack of the Clones to theaters on May 16, 2002. George Lucas directed the film which starred Hayden Christensen, Natalie Portman, and Ewan McGregor.