An all-star cast chronicles the life and ministry of Jesus of Nazareth and his final moment in triumphant retrospect. 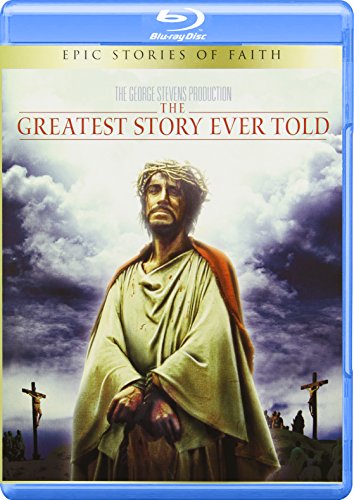 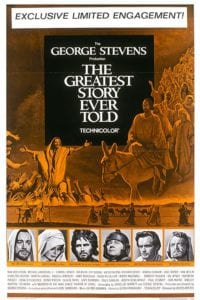 The Greatest Story Ever Told begins with the three wise men following a shining star from Asia to Jerusalem in search of a newborn king. King Herod the Great, whose advisers have informed him of a prophesied Messiah being born in nearby Bethlehem, he sends the Magi there to confirm the child’s birth He also secretly sends some guards to keep an eye out on what else transpires.

Once in Bethlehem, the Magi find Mary, Joseph, and their newborn son, Jesus, in a manger. The Magi present the gifts of gold, frankincense, and myrrh to the newborn. The Magi watch the spying guards leave, and they advise Joseph to flee the town with his child.

The guards return to Herod, and inform him of Jesus’ birth. He orders them to kill every newborn boy in Bethlehem. Luckily for Joseph and Mary, they escaped to Egypt with Jesus before he could be killed. Herod dies at this time, and after a messenger tells Joseph and Mary the news, the return home to Nazareth.

Soon, a pro-Israel rebellion breaks out in Jerusalem. While Herod’s sons quickly put an end to the rebellion, Herod’s kingdom is now divided. A governor now oversees Judea, and Herod becomes the tetrarch of Galilee, and he and the Romans try to convince the people that the Messiah will never come.

Fast forward many years, and Jesus is fully grown. John the Baptist preaches at the Jordan; baptizing anyone who repents. John baptizes Jesus, and he then goes into the nearby mountains. There, Jesus finds a cave with a mysterious hermit living there He is said to be the personification of Satan. The Dark Hermit tempts Jesus three times, but Jesus over comes each one. He leaves, and continues up the mountain with John’s message running through his mind.

Jesus returns to the valley, and he tells John he’s returning to Galilee. Judas, Andrew, Peter, and John ask to go with him. Jesus agrees with the goal to make them fishers of men. As they rest under a bridge, a young man named James overheard Jesus’ teachings. He asks to join them too, and Jesus welcomes him into the fold.

Soon the group nears Jerusalem, where Jesus declares that there will come a time to enter. They rest at the home of Lazarus and his sisters, Martha and Mary, in Bethany. Lazarus wants to join Jesus, but cannot leave everything behind. As Jesus continues on his journey, he promises Lazarus that he will not forget him.

They next arrive at Capernaum, and meet James’ brother Matthew. He joins the group too. At one of the synagogues in town, Jesus miraculously helps a crippled man walk again. This attracts many more followers that follow Jesus on his journey, and they listen to his teachings.

Back in Jerusalem, the priests and Pharisees do not like the Baptist’s growing influence and preachings. Governor Pontius Pilate only wants to maintain the peace, but since Herod rules over the Jordan, he allows the priests to inform him of what’s going on. When he learns that the Baptist speaks of a Messiah, Herod immediately sends his soldiers to arrest him. When a Zealot named Simon informs Jesus of the Baptist’s arrest, Jesus welcomes him as one of his own.

Jesus’ fame spreads across the land, and two more men,Thaddeus and Thomas, also join him. In Jerusalem, the priests continue to be suspicious of Jesus, and his curing of cripples. They send he Pharisees Nicodemus and Joseph of Arimathea to Capernaum to investigate. Herod questions John the Baptist about Jesus, and consider killing the Baptist. His wife is all for that as she is the ex-wife of Herod’s brother, and John has accused her of adultery.

James soon asks Jesus to return to Capernaum. Once there, crowds gather to celebrate his return. The Pharisees and Dark Hermit witness his arrival among other things. Jesus defends Mary of Magdalene who was caught in the act of adultery, and then a sick woman cures herself when she touches Jesus’ clothes. These simple acts influence a great many to have faith in Jesus.

As Herod wonders about Jesus, and the Baptist confirms to him of Jesus’ escape from the massacre Herod’s father ordered. Herod beheads the Baptist while Salome dances for him. Herod then sends soldiers to arrest Jesus.

While Jesus gives a sermon on a mountain to a large crowd, Pilate and the Pharisees learn of many of Jesus’ miracles: turning water into wine, feeding five thousand people, and walking on water.

At Nazareth, the people don’t believe in Jesus or his miracles, and demand proof. They bring a blind man named Aram, and demand Jesus make him see. He does not. Jesus then reunites with his mother, Lazarus, and his sisters. Andrew and Nathaniel escort Lazarus home to Bethany as he’s now very sick. Jesus and the others flee from Herod’s approaching soldiers, but Jesus first pauses heal Aram’s sight.

Jesus is told that Lazarus is dying, but Jesus does not immediately return to Bethany. Instead, he heads to the Jordan where the group gives a prayer. Andrew and Nathaniel inform them that Lazarus has died. Jesus goes to Bethany, and brings Lazarus back to life. The miracle amazes the Jerusalem citizens, but it gravely concerns the Pharisees.

Judas questions why Mary Magdalene is anointing Jesus with expensive oil. he replies that she is preparing him for his death. Jesus dons a new garment, and rides on a donkey into Jerusalem. There, in the courtyard of the Temple, Jesus drives out the merchants and money changers. The large crowd prevents the Pharisees from arresting Jesus, something that should not be allowed to be ordered during Passover. He teaches in the Temple courtyard, but leaves after Pilate orders the soldiers to restore the peace; killing many as a result.

As the disciples gather for an evening meal, Judas leaves them, and heads to the Pharisees, and promises to hand Jesus over to them on the condition that no harm comes to him. Once Judas returns to the meal, Jesus states that one of them will betray him, and by morning Peter will deny three times that he knows Jesus. He then gives bread and wine to the disciples, and tells Judas before he leaves again to quickly do what he has to do.

Judas leads the soldiers to Jesus for thirty pieces of silver while Jesus prays at Gethsemane. When the soldiers arrive, Judas kisses Jesus, and he orders Peter to put his sword away. Jesus is tried in front of the Sanhedrin. Aram appears as a witnesses, and while most members are present, Joseph of Arimathea is not. Meanwhile, a Hermit asks Peter if he knows Jesus–Peter denies it twice and leaves. Caiaphas asks Jesus if he is the Christ, Jesus’ reply causes condemnation.

The Pharisees and Caiaphas bring Jesus to Pilate, who then questions Jesus. He finds no guilt in him. However, since Galilee is under Herod’s authority, Jesus is sent to him. He and his soldiers just ridicule Jesus, and send him back to Pilate. Peter denies Jesus a third time, as Judas looks on.

The next morning, Pilate presents Jesus to the assembled crowd. The Hermit begins calling for Jesus’ crucifixion. Pilate offers to release a prisoner of the crowd’s choice; they choose an alleged murderer named Barabbas. Pilate then asks Jesus if he has anything to say; to which he replies that his kingdom is not of this world. With no other choice, Pilate reluctantly orders Jesus’ crucifixion.

Jesus carries his cross through Jerusalem while the crowd looks on. After he collapses, a woman wipes his face. The soldiers allow Simon of Cyrene to help Jesus carry the cross when no one else will. At Golgotha, the soldiers strip Jesus, and nail him to the cross. They then raise it between those of two other men. Judas throws his silver into the Temple and kills himself.

Jesus asks God to forgive them, for they know not what they do, and leaves his mother in the care of John. As the sky darkens, Jesus asks why God has forsaken him, and he dies before a storm emerges. John Wayne as a centurion says, “truly this man was the son of God,” as an earthquake rumbles through the earth.

Jesus is laid to rest in the tomb of Joseph of Arimathea. The Pharisees requests Pilate place guards around the tomb, and seal it to prevent the theft of Jesus’ corpse. They do not want any chance that a prophecy of resurrection occur. Pilate agrees, but the next morning the guards find the tomb to be open…and empty.

Although Thomas’ faith is weakened, Mary Magdalene, Peter and some others rejoice at the prophecy when they see the empty tomb. Word spreads throughout Jerusalem, and Caiaphas claims that the whole thing will be forgotten in a week.

Jesus ascends to heaven before his disciples, Mary Magdalene, Nicodemus, Joseph of Arimathea, and the others. He offers them his parting words as clouds engulfs him. He states that he will always be with them even unto the end of the world.

User Rating: Be the first one !
May 13, 2019
6 minutes read
Show More
Back to top button
Close
Close