A group of Green Berets, under the command of Colonel Mike Kirby, defend a firebase called Dodge City during the Vietnam war. Reporter George Beckworth accompanies the men even though he objects to both the war and the methods US forces use to fight it. When Kirby finds the Viet Cong and North Vietnam Army is about to take control of the base, he orders his troops back until an airstrike can help them retake it. Soon Kirby’s Superiors order him on a mission to capture a high-level Viet Cong officer deep in enemy territory Meanwhile, Beckworth gains respect for Kirby and US troops. 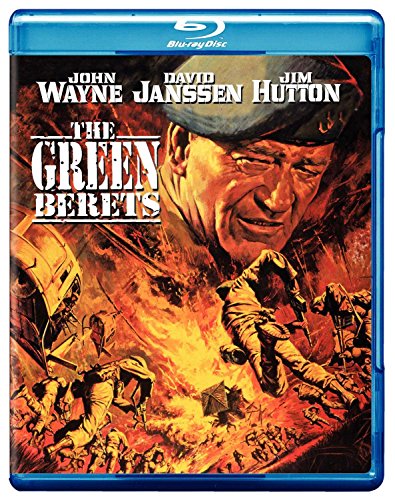 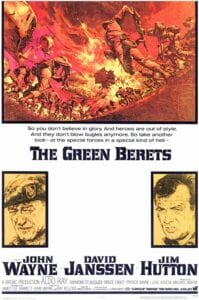 The Green Berets begins at Fort Bragg, a U.S. Army training camp in North Carolina. We meet a group of cynical reporters attempting to lecture two soldiers on the need for the Vietnam War; one of whom, George Beckworth (David Janssen), seems to be the lead cynic. At the conclusion of the discussion, Beckworth approaches Colonel Mike Kirby (John Wayne). Kirby asks him if he’s ever been to Southeast Asia, and Beckworth replies he has not, which provides for an awkward moment of reflection for the man.

Kirby’s superior orders Kirby to South Vietnam with two groups of handpicked Special Forces troopers. After arriving, Kirby meets Beckworth again, and permits him to join them at a base camp nicknamed Dodge City.

At the camp, Sergeant Petersen (Jim Hutton) befriends a local boy named Ham Chuck (Craig Jue). He’s a war orphan at the camp with no family other than his pet dog and a few other soldiers at the base camp.

Eventually, Captain Nim (George Takei) arrives from the jungle with a group of men and some casualties. He’s a former Viet Minh officer from Hanoi, now fighting for the anti-communist South Vietnamese government. His only thought is to kill all the stinking Viet Cong to win the war.

One night, as Beckworth and several other men; Sergeant’s Provo (Luke Askew), Watson (Eddy Donno), and Lark (Charles Bail) play cards, the Viet Cong mortars the camp to harass them. The shelling strikes the dispensary, communications bunker, and team house. Captain Coleman (Jason Evers) takes a direct hit and dies; it was his last night of his tour of duty. Nim believes there are spies within the camp which is why the shelling was so successful.

One day, as Sergeant Muldoon (Aldo Ray) supervises a group of men clearing more of the jungle around the base camp, he notices a suspicious local man measuring one of the buildings. They take him to Captain Nim who discovers a silver cigarette lighter on his person that belonged to a murdered medical specialist who was a friend of Kirby’s.

Beckworth witnesses Nim torture the man to illicit a confession out him. He angrily confronts Kirby about it. However, the Colonel justifies the interrogation because the Viet Cong are ruthless killers.

Later, Beckworth accompanies Kirby and his team on a patrol to a local village to rescue some villagers they helped the day before. When they arrive, they find the Viet Cong arrived before them, and killed all the men including the village’s chief. The chief had brought his granddaughter to Kirby’s camp the day before because she injured her foot on a Viet Cong trap. They find that girl alone; dead in the jungle. This devastates Beckworth, who bonded with her during their brief encounter. He very quickly changes his mind about America’s involvement in the war.

A few nights later, the Viet Cong/North Vietnamese Army launches a massive nighttime attack on the camp. As Kirby and Muldoon assess the situation in a helicopter above, enemy fire shoots it out of the sky. A nearby patrol rescues the men. As the attack continues, Beckworth helps in the fight as well; including his assistance in moving the local villagers into the camp for protection.

During the fight, the enemy kills Ham Chunk’s pet dog, and he goes to bury it. A worried Petersen goes looking for the boy. When he finds him, he takes him to the other refugees in the camp. Shortly, the enemy breaches the camp’s barbed wire fences, and the Green Berets fall back to the inner perimeter. Many soldiers on both sides die as well as civilians.

Kirby and Muldoon return with reinforcements and a US airstrike, but they have little success. When double agents shoot Sergeant Provo in the back, Nim sets off hidden explosives to kill them. Parks finds him in a bad way, but still alive. Enemy artillery kills Nim as he detonates hidden mines.

As the sun rises, the enemy takes full of the camp when Kirby orders his troops to fall back. Once the Viet Cong/North Vietnamese Army fills the camp, Kirby orders an airstrike on the camp; allowing them to retake it.

Kirby and Beckworth talk in the fight’s aftermath. Beckworth says the newspaper he works at will most likely fire him for writing a story which supports the American war. He thanks Kirby for the experience and returns to Da Nang Air Force base with the reinforcements. Provo dies from his wounds, and requests a memorial sign called the Provo Privy in his honor.

Kirby, Ca, Muldoon, Peterson, and a selected team parachute into the North Vietnam jungle. However, soon after landing, a group of locals kill Kirby’s point man, Sergeant Kowalski (Mike Henry). Kirby then tasks Muldoon, his medical specialist, Sergeant Doc McGee (Raymond St. Jacques); and two of Cai’s men to set explosives on a bridge over a river. They will blow it up at the necessary time to prevent the North Vietnamese Army from chasing them.

When night falls, Kirby and his group arrive at the General’s plantation. They watch as Lin (Irene Tsu), who is Colonel Cai’s sister-in-law and their spy on the inside arrives with the General in his car. Kirby, Cai and their men silently kill all the sentries around the mansion before capturing the General with Lin’s help. They remove him, and put him in the trunk of his car. As Kirby, Cai, Petersen, Watson, and Lin drive off in it, the General’s guards discover the team. They quickly kill the rest of Kirby’s men he left behind.

Back at the bridge, Muldoon, Doc McGee, and the other soldiers have successfully wired the bridge with explosives. As dawn breaks, Kirby radios them to say they are approaching. The car passes over it, as Muldoon’s group escapes on motorcycles. As the North Vietnamese guards shoot at them, Muldoon pulls over to blow up the bridge. However, in the melee, Doc McGee winds up with a serious bullet wound in the back. The team regroups, sinks the car in a lake, and calls out a plane to Skyhook the General out of the area.

With him gone, the group heads to the woods to wait for helicopters to pick them up. An enemy booby trap catches Petersen which impales him on a wall of punji sticks. Kirby and his team must leave his dead body behind.

Back at Da Nang Air Force base, Beckworth brings Ham Chuck to the field where he waits for the return of the helicopters. Beckworth says goodbye to the boy and joins another group of soldiers heading out into the jungle.

Once the helicopters arrive, Ham runs everywhere looking for Peterson. The boy begins to panic when he can not find him. Peterson was the only person left he considered family. As he runs off to the nearby beach in tears, Kirby approaches him to tell him the news.

Ham Chuck asks Kirby what will happen to him now. Kirby gives him Petersen’s green beret and replies, “You let me worry about that, Green Beret. You’re what this thing’s all about.”

The two walk off into the sunset holding hands.