When one disaster after another happens on a trans-Pacific flight, it leads to the pilot losing his nerve. This leads to the washed up copilot doing his best to land a plane with a cabin full of passengers carrying more emotional baggage than the flight crew can handle. Luckily, flying a plane is no different from riding a bicycle; it’s just a lot harder to put baseball cards in the spokes. 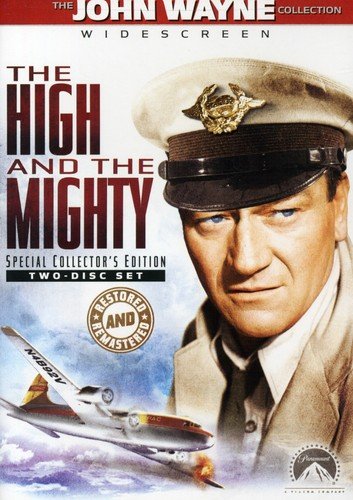 The High and the Mighty (Two-Disc Collector's Edition)

‘The High and the Mighty’ Movie Summary 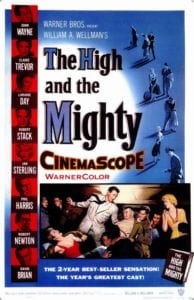 The High and the Mighty starts in Honolulu, Hawaii where a DC-4 prepares to take off for San Francisco with 17 passengers aboard.

The crew of five is comprised of Captain John Sullivan, who secretly fears the responsibility of keeping passengers and his crew safe while in the air. The plane’s first officer, Dan Roman (John Wayne), still has trouble from a crash that killed his wife and son and left him with a permanent limp. There’s also a wet-behind-the-ears second officer named Hobie Wheeler, a veteran navigator Lenny Wilby, and a stewardess named Miss Spalding.

The passengers have their troubles too. May Holst is a cynical former actress. Lydia Rice is a rich heiress in a loveless marriage. Sally McKee is a past-her-prime ex-beauty queen. Also on board is a happy vacationer named Ed Joseph, the terminally ill Frank Briscoe, and a last minute arrival named Humphrey Agnew whose odd behavior concerns the crew.

After takeoff, the crew begins to suspect something is wrong with the propellers due to some intermittent vibrations. Dan inspects the tail, but can not find anything out of the ordinary.

Soon, Humphrey gets up and begins accusing another passenger, Ken Childs, of having an affair with his wife. The men start to fight, and Humphrey pulls a gun on him. Before he gets the chance to shoot him, the plane loses a propeller, and the engine explodes in flames. The crew manages to extinguish the fire, but the violent rattling in the plane breaks the engine free from its mounts.

They radio for help, but Dan discovers that the plane is losing fuel from the explosion. That coupled with turbulence, and the drag from the damaged engine, and this plane will run out of fuel before they get back over land.

Meanwhile, passenger José Locota has managed to disarm Humphery, and forces him to sit down and shut up. Gustave Pardee, who has a debilitating fear of flying, manages to calm down the frantic passengers.

Dan comes out to explain the situation to everyone, but their chances for survival are one in a thousand. The passengers manage to put aside their differences and personal issues to come together and help with anything needed.

Back in San Francisco, Tim Garfield arrives with little hopes of the plane’s survival, but when the wind changes for the better, the crew gets their hopes up that they will have just enough fuel to make it. However, navigator Wilby made an error in his calculations, and the do not really have enough time.

Dan’s years of flying tells him that they have a better chance of landing on land than in the sea at night, but Captain Sullivan panics, and prepares to land the plane in the water immediately. Dan slaps some sense into him, and Sullivan decides to try to make land.

Finally, the plane makes its approach to San Francisco, at dangerously low levels, in the middle of night, and under the cover of rain. The airport prepares for their emergency landing while the plane closely passes the hills of the city. The spot the airport’s runway lights ahead of them, and land the plane safely.

The passengers disembark from the plane among a group of reporters. Garfield helps the crew inspect the plane, and they find it only had 30 gallons of gas remaining. Dan’s gamble paid off, and he walks into the dark whistling a little tune.