Once again, someone has stolen the world-famous diamond, The Pink Panther, and its up to Inspector Jacques Clouseau to again catch the thief. Across two continents, the inept inspector will do his best to prove Sir Charles Phantom is the notorious Litton! Along the way, Clouseau must also battle his oriental manservant and a mysterious assassin out to kill him. 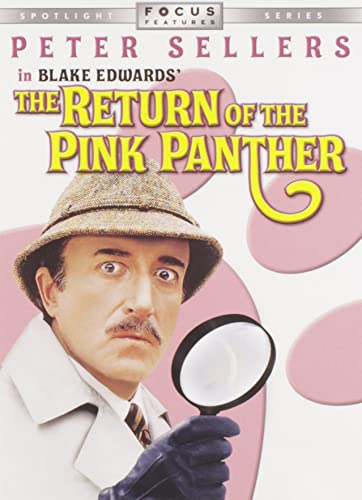 The Return of the Pink Panther

‘The Return of the Pink Panther’ Movie Summary 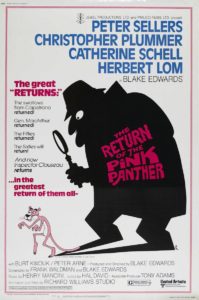 In the Arabian country of Lugash, an unknown thief slides across a marble floor of the country’s heavily guarded museum to steal the world’s largest diamond known as the Pink Panther. The thief then leaves a white glove in its place with a gold “P” embroidered on it. With this national treasure missing again, the Shah of Lugash calls up the head of France’s Sûreté and requests they send the same inspector who found the diamond the last time someone stole it; the bumbling Inspector Clouseau (Peter Sellers).

In Paris, Chief Inspector Charles Dreyfus (Herbert Lom) despises Clouseau so much it’s literally driving him crazy. He’s already demoted the idiot to a meager beat cop, but when Clouseau fails to stop a bank robbery while harassing a blind man and his monkey, Dreyfus suspends him without pay for six months.

He’s to immediately reinstate Clouseau and send him to Lugash. Clouseau receives this news in his apartment while in the midst of fending off a surprise attack from his servant Cato (Burt Kwouk). Clouseau has ordered him to attack when he least suspects it to keep the him on his toes.

As soon as he hangs up the phone, a stealthy figure knocks on his apartment the door and delivers a lit bomb. The explosion nearly blows Cato’s little yellow skin off, both men survive. Clouseau now believes a mysterious assassin wants him dead and it’s related to the Pink Panther mystery.

Once in Lugash, Clouseau examines the crime scene—clumsily breaking some priceless antiquities in the process—before implicating Sir Charles Litton (Christopher Plummer) as the notorious Phantom and the diamond’s thief. He sets out to find the man’s whereabouts and arrest him in the name of the law.

He first stakes out Sir Charles’ manor in Nice, France. Dressed as a phone repairman, Clouseau meets Sir Charles’ wife, Lady Claudine Litton (Catherine Schell), but she and her butler, Mac (David Lodge), are immediately on to him. They fake a phone conversation that Clouseau overhears where Lady Litton says she will meet the man on the other side of the line at the Gstaad Palace hotel in Switzerland. Clouseau then tails her by train to Gstaad.

While this is going on, Sir Charles has made his way to Lugash to clear his name. At the beginning of the film, Lady Litton teased him about the theft, and they decided that he must find the real thief because someone has framed him with that glove.

He first tracks down the Fat Man (Eric Pohlmann) to learn more. However, the Fat Man orders his men to kill Sir Charles because the secret police are using the theft as an excuse to purge their political enemies. With him dead, life would go somewhat back to normal.

However, Sir Charles escapes the attempt on his life and makes it back to his hotel room. In the room, the secret police chief, Colonel Sharki (Peter Arne), waits for him. Sharki confirms that the Fat Man’s understanding of the situation is mostly correct, but he says the diamond must eventually be recovered. Sir Charles agrees to help with their investigation—or pretends to for the time being.

The next day at their headquarters, they show Sir Charles footage of the day of the theft while they have him attached to a lie detection machine. Each time the machine registers no real reaction to the people at the museum, except for one; a young man with a goatee.

Once he’s done with the police for the day, Sir Charles tracks down the Fat Man’s minion, Pepi (Graham Stark) to arrange a secret way out of the country via truck. However, this is another Fat Man setup to kill Sir Charles, but he escapes yet again. While this goes on Sharki covertly follows Sir Charles because he believes Sir Charles will lead him to the diamond.

Back in Gstaad, Clouseau is hot on Lady Litton’s tail, but he’s no closer to solving the case than when he began. While taking a bubble bath, Dreyfus calls him and orders him to arrest Lady Litton in her hotel room. He agrees, but after he hangs up, he realizes he doesn’t have a reason to arrest her. He calls Dreyfus back in Paris to clarify the order, only to have François (André Maranne) tell him that Dreyfus is on vacation.

At the same time, Sir Charles arrives at the hotel from Lugash where he confronts Lady Litton with the news that he knows she stole the Pink Panther. After some playful prodding, she admits to stealing it because they needed some fun in their lives.

Colonel Sharki shows up to take back the diamond and kill them both. However, as he’s about to shoot them, Inspector Clouseau barges in to arrest Lady Litton. Sir Charles brings Clouseau up to speed on the situation as he’s still clueless to the truth, and his immanent danger. Sharki is more than happy to kill all three of them.

While this goes on, Dreyfus is hold up in a room at the same hotel. From his location, he has a clear shot into Lady Litton’s room. We learn that he’s the mysterious assassin that’s been trying to kill Clouseau this whole time. He takes his rifle and aims it at Clouseau, but as he pulls the trigger, Clouseau falls for Sharki’s “your zipper’s down” trick. Clouseau ducks to check his zipper as Dreyfus shoots. He misses Clouseau and kills Sharki.

Now completely out of his mind, Dreyfus begins blindly shooting into the room. When the Hotel Concierge (Victor Spinetti) and its Bell Boy (Mike Grady) arrive to check on the ruckus in Dreyfus’ room, he attacks them with his bare hands until local police can come and arrest him.

With the Pink Panther safely back at Lugash’s national museum, the Sûreté promotes Clouseau to the now vacant Chief Inspector position. Sir Charles, realizing that his wife was right and that he was bored, resumes his career as a jewel thief.

The film closes at a Japanese restaurant where Clouseau eats with François. When a Japanese waitress delivers some Chinese fortune cookies to him, Clouseau realizes something is amiss. Suddenly, that waitress attacks him and we see that it’s Cato in disguise. This sets off a brawl between the two which destroys the restaurant.

Dreyfus finds himself in a straitjacket at an insane asylum for his actions. Inside his padded cell he writes “Kill Clouseau” in blue crayon over and over with his foot for a happy ending.

United Artists released The Return of the Pink Panther on May 12, 1975. Blake Edwards directed the film starring Peter Sellers and Christopher Plummer.