They Were Expendable takes place in the aftermath of the attack on Pearl Harbor. Lieutenant John Brickley leads an experimental squadron of agile fast-attack Patrol Torpedo boats, and the US government send them to Manila to avert a potentially imminent Japanese invasion. As he and his second-in-command try to prove this newly-founded naval unit’s worth, the enemy launches all-out attack which devastates them. However, the PT boat does prove its worthiness when it does well against larger numbers and guns. Unfortunately, it’s still not enough to prop up the doomed Philippine campaign. Many American men lose their life in battle. 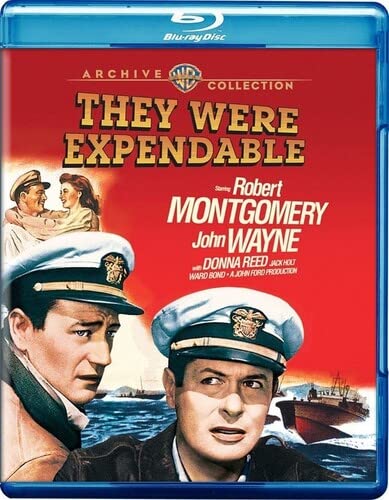 They Were Expendable [Blu-ray]

‘They Were Expendable’ Movie Summary

They Were Expendable begins in the days after the attack on Pearl Harbor, Lt. John “Brick” Brickley (John Wayne) and his squadron of PT Boats gets sent to the Philippines to help protect against a Japanese invasion of the South Pacific, but the PT Boats are as welcome by the military elite as cockroaches at a 5-star restaurant. Lt., J.G. “Rusty” Ryan, a subordinate of Brick’s, becomes frustrated with his superiors who fail to recognize just how valuable the boats are in battle. After all, they do float like a flounder and sting like a ray, but for now they are relegated to messenger duty.

Brick and Rusty press for transfers to destroyer, but the brass above refuses, and eventually the PT Boats hear the sweet, sweet sounds of “Tora, Tora, Tora” from all around; leading to harrowing battles.

Eventually, the Armys begrudgingly accepts the PT Boat’s value in battle, and sends them in to help destroy cruisers. As Brick’s successes mount, his squadron gets depleted one after the other until there is only a single PT boat remaining. The film closes with that last one being transferred to the Army for messenger duty. Brick, Rusty, and two red shirts end up getting transferred to Australia to train new PT Boat officers. The remaining men are left in the theater to fight until help arrives or they are killed; whichever happens first.