In Trouble Along the Way, Steve Williams is a a down-on-his-luck former football coach looking to turn his life around. He takes a head coaching job at a down-on-their-luck Catholic college looking to turn their program around. Williams soon finds himself struggling to retain custody of his daughter following a divorce, and retain his job at his new school after a recruiting scandal. Can he turn himself and this tiny school into winners? 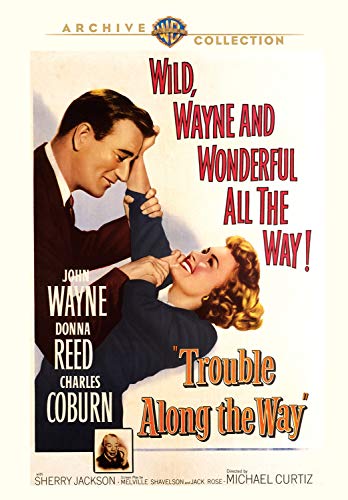 ‘Trouble Along the Way’ Movie Summary 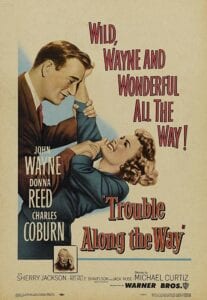 Trouble Along the Way begins at a struggling Catholic college named St. Anthony’s College. With its finances in a mess, the Church plans to close it. The school’s elderly rector, Father Burke is in a bit of denial about his advancing years, and the state of the school, but he hatches a plan to save both himself and the school from a forced retirement.

He hires Steve Williams (John Wayne), a former big-time college football coach, forced out of the game, to turn their football program into a money-making machine that will pull the school out of its financial doldrums. Williams first turns down the job as he and his daughter, Carole, are doing just fine living off his gambling income.

However, Williams has an ex-wife named Anne, and she’s a gold-digging, spiteful woman. When she files a report to Social Services that he is an unfit father, he accepts the Father’s offer in hopes that a job at a respectful school will look better to the courts.

After Williams rejects Anne’s proposition to have an affair with her, she decides to go forward and sue for custody of their 11-year-old daughter, Carole. Anne really could care less about the girl; she hasn’t even seen her in five years. She’s just using her daughter to spite Steve. You see, Williams is great with the ladies, and while her current husband can’t compete with the front of his pants, Steve can not compete with the back of his. Anne’s husband has one fat wallet—he’s loaded—I mean Richie Rich selling Grit type loaded. I don’t know how Anne is so skinny when she just wants to do is eat her cake, and then still have it too.

Meanwhile, Social Services assigns Alice Singleton to Carole’s case. She’s very cold towards Steve because her own life experiences have prejudiced her against him. Her father raised her as an only child herself as well, and her relationship with him is similar to that between Steve and Carole. She now looks back at that relationship with much regret, and because of it, plans on reporting to the court in Anne’s favor no matter what. However, Steve’s no quitter, and he sets out to charm the pants right off of Alice.

Meanwhile, Father Burke needs his football gamble to pay off quickly, or the Church will shut the school down at the end of the semester. He uses his clerical connections to schedule St. Anthony’s against high profile Catholic colleges of the day like Villanova and Notre Dame on NBC Sports. Upon hearing this scheduling news, and knowing his players are worse than terrible, Steve quits as St. Anthony’s coach.

While packing their things, Carole sends Steve on a guilt trip, and he changes his mind into staying. He uses deception, deceit, and half-truths to enroll available star athletes as freshmen for a winning team. After their first game is a blowout, Anne spites Steve yet again. She rats him and his shady practices out to Father Burke who has been willingly naive to Steve’s dishonest methods. Ashamed and embarrassed, Father Burke fires Steve (who regrets nothing) and disbands the team. This will of course cause St. Anthony’s to close for good.

Back at the Social Services office, Alice submits her final report on Carole to the court which is quite unfavorable to Steve. However, upon testifying under oath in court, she repudiates it after finally recognizing both her bias and Anne’s lack of honest affection for Carole. She still testifies that Steve isn’t a properly responsible parent, but by now, he’s charmed the pants off her, and under further questioning, she answers yes when asked if she’s in love with him. With this revelation, the judge puts a stop to the proceedings, and places Carole in custody of the State. He assigns her a male case worker until matters can be sorted out.

At St. Anthony’s, the Church throws the school a life line when it surprisingly decides to continue funding it. However, Father Burke still resigns as rector for behaving selfishly in order to continue working a position that he should have retired from long ago.

The film ends with Alice picking up Carole to bring in to the State. (Although I am not sure why the new male case worker can not do that.) As the two ladies walk away, it’s implied that the three will eventually live happily ever after as one family.