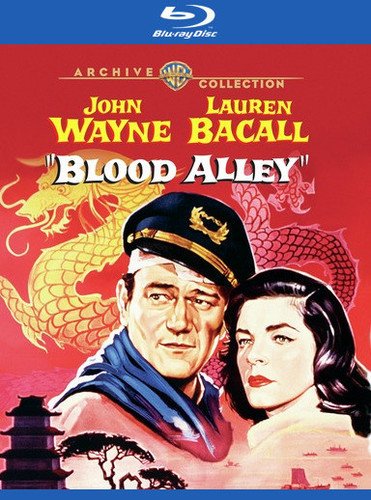 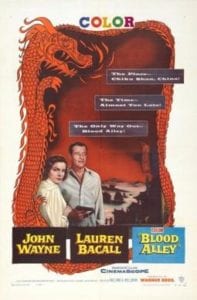 Blood Alley begins with Chinese Communists capturing the ship of Captain Tom Wilder (John Wayne), an American Merchant Mariner. They imprison him for two years, but he eventually escapes wearing the uniform of a Soviet army officer. A Chinese man who helped Wilder escape for some reason transports him to the Chiku Shan village.

Once there, a man named Mr. Tso explains why they brought him there. He wants Wilder to transport his people out of Red China to Hong Kong via the 300 mile Formosa Straight (aka Blood Alley). With nothing but his memories of the Chinese coast, an unreliable compass, and a wood-burning 19th Century stern-wheel riverboat, the Captain accepts the challenge.

The villagers have been planning the escape for over a year; secretly raising the bottom of their harbor channel with stones to trap any Red Chinese patrol boats lured inside. The villagers have also been quietly stockpiling assorted guns. One complication is the Feng family. They need to come along so they can not spoil plans, and alert authorities.

The riverboat’s Chief Engineer is a Navy-trained engineer named Tack. He and Wilder bring the riverboat to the village, and load it with firewood and boiler water. They name the boat the Chiku Shan.

Also at the village is the American Cathy Grainger. Her father was a medical missionary there until the Red Chinese murdered him after one of his surgeries killed a political commissar. When Cathy won’t leave the village, Wilder chooses to let her know that her father is actually dead. She won’t believe him.

The villagers lure a patrol boat into the harbor, and trap it. They then head down the coast where they sneak past a People’s Liberation Army Navy destroyer; disappearing into a fog bank. To evade capture, they sail at night, and hide during the day.

The Feng family soon poisons the food, and use a severe storm to attempt a mutiny. That fails though. However, it’s during this time that Cathy falls for Captain Wilder, so he has that going for him, which is nice.

Now with a food and water shortage thanks to the Feng clan, the Chiku Shan sails to a boat graveyard in Honghai Bay. Captain Wilder has everyone search the wrecks there for fuel and potable water. As they pass through the graveyard, the riverboat hits a piece of timber which moors the boat, and breaks a paddle blade. This costs them significant delay which they can not afford.

Cathy goes ashore; only to return when she finds out Wilder told her the truth about her father’s death. Wilder removes the Fengs from the boat; only for them to return once a Red Chinese destroyer begins shelling the graveyard. When the Chinese send some patrol boats to search for the Chiku Shan, it runs into a marsh where it disappears.

The villagers pole and tow the riverboat through miles of marshlands until they reach the open sea to keep themselves hidden. Once back to the open sea, Tack fires up the boiler, and they proceed to Hong Kong.

They make it to the British colony, and a flurry of steam whistles and boat sirens warmly greets them as they pass through the harbor. They all live happily ever after… except for the Fengs, but screw them. They didn’t want to come along anyhow!