Irwin “Fletch” Fletcher is an undercover Los Angeles journalist. As Jane Doe, he’s written several controversial articles which have caused heads to roll in the past. Now, in disguise as a bum, he lives at the beach, researching various drugs and nearby drug dealers. One day, a rich man named Alan Stanwyk approaches Fletch in disguise and asks him (as the bum) a favor. He says he has cancer and wants Fletch to shoot and kill him for $50,000, so that his wife will get the insurance money. What Stanwyk doesn’t know is that Fletch’s is an investigative reporter, and his offer intrigues him. Fletch begins researching the man, and learns that not only is Stanwyk healthy, but he also has some sort of connection to the drug dealing at the beach. Fletch sets out to learn the truth; even if it kills him. 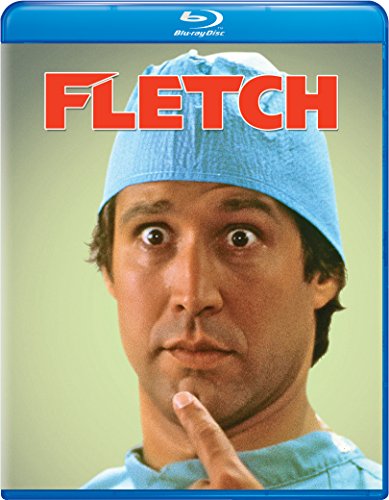 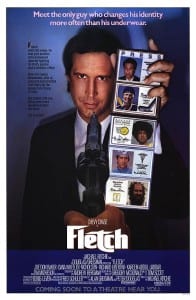 Fletch is based on a 1974 mystery novel by Gregory McDonald. The book was the first in a series featuring the character Irwin Maurice Fletcher. The series lasted eleven books and even launched a spin off series for a supporting character, Inspector Francis Xavier Flynn, that lasted four books itself.

The Edgar Allen Poe Award winning first novel, which the film is based on, introduces I. M. Fletcher, a journalist and ex-marine staying on a beach watching the drug culture for a story, waiting to find the dealer’s source before publishing an exposé. When Universal went to cast the film, they initially looked to likes of Burt Reynolds and Mick Jagger, but ultimately settled on Chevy Chase due to his obvious marine like physique and gift of drama. He also had the decided advantage that the author had never seen him in anything when he agreed to his casting.

Our film begins much like the book, with Fletch, now just a journalist, staying on a beach watching the drug culture for his column in the paper. Because when I think of drug dealers, I often think of Norm from Cheers. Aren’t drug users usually thin and strung out?

Anyways, Fletch is approached by Alan Stanwyk, played by Tim Matheson. Stanwyk tells Fletch that he has inoperable cancer and wants Fletch to kill him so that his family will receive his life insurance. The idea immediately has appeal to Fletch, probably because he saw Up The Creek like I did in the 80’s and Matheson was terrible in it.

It was a blatant rip off of his Capt. Birkhead character in Spielberg’s 1941, which was just ripping the Eric Stratton character in classic Animal House. Matheson deserved to die for his lack of creativity. Hasn’t he ever heard of type-casting. But I digress.

Stanwyk tells Fletch that he is the perfect man for the job. He tells Fletch that he appears to be a person who can simply disappear after the shooting without any suspicions being raised. And, oh yeah, he will give Fletch $50,000 for the job as well. Fletch agrees to kill Stanwyk, because this newshound can smell a good story. Fletch has no intention of killing Otter, but soon starts checking out Stanwyk’s story. He digs deep into Stanwyk’s medical history, and finds out that lying son-of-bitch doesn’t have cancer.

Fletch probes Stanwyk’s wife (Dana Wheeler-Nicholson) for information while simultaneously helping her with her forehand stroke. He takes a trip to Utah, where apparently all the citizens are made up of the cast of Newhart, including Larry sans his brother Daryl and his other brother Daryl.

In the meantime, Fletch is under pressure to write his expose on the drug traffic on the beach. His undercover investigation draws the attention of the police chief, played by mother-fucking Mitchell himself (Joe Don Baker).

Mitchell threatens to kill Fletch if he doesn’t back off the story, stating that he is about conduct a huge sting operation, and he doesn’t want Fletch and a bunch of meddling kids interfering. Fletch agrees to not write the story, but suspects that the police are now somehow involved in the beach drug business. Oh, how the Mitchell has fallen…or risen depending on your point of view.

Fletch soon revisits Stanwyk’s wife, and sparks soon start to form. Fletch soon learn that Stanwyk has another wife, living in Utah. No, he is not Mormon, because he is not into singing in the Tabernacle choir and shit, he is just into the polygamy.

Faster than you can say M. Night Shyamalan, Fletch’s two news stories soon become one, when Fletch learns that the separate storylines are actually connected. He confronts Stanwyk about Stanwyk’s real plan, which is to murder Fletch, and have his body burned in a car accident. Stanwyk wants to fake his own death and live out his life with his Mormon wife, and he plans on using Fletch’s similar bone structure to do so.

Now, I know they were both considered for the role of Otter, but physically, Chevy Chase and Tim Matheson look nothing alike. Chase was bloated and heavy from just getting off drugs, and Matheson still had the body type of, well, Otter from Animal House.

Mitchell quickly kills Stanwyk, leaving Fletch and Stanwyk’s wife to take on the mighty Mitch himself. Which they shortly do, with the help of well-placed tennis racquet to the back. Fletch writes his column, gets the girl, and heads off to Rio, all at the expense of the Underhills. Little did Fletch know that trouble loomed on the horizon just a few short years later, which would spell the death of franchise in the ironically titled, Fletch Lives.