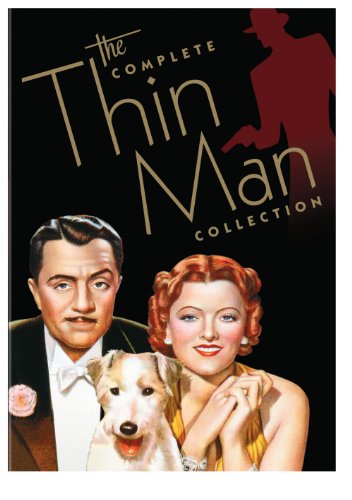 Nick, Nora, and Asta find themselves back in the Big Apple, and now they have a bouncing baby boy with them named Nicky Jr. Once there, a man named Colonel MacFay invites the them for a weekend visit at his house in Long Island. MacFay says a man named Phil Church wants him dead and after MacFay turns up dead, Church becomes suspect numero uno. However, Nick suspects something else is afoot…

When a horse jockey turns up dead, the murder puts a cramp in Nick and Nora’s hopes for a pleasant afternoon at the local race track. Nick’s friend Lt. Abrams wants him to help out, but Nick is too busy enjoying the good life to be bothered. However, when Major Scully asks him to look into corruption and the role of organized crime in gambling, Nick joins the investigation. After several more murders occur, Nick gathers everyone into the same room to reveal the true identity of the killer.

Nick and Nora head to Nick’s hometown of Sycamore Springs to spend some time with his parents. His father, a prominent local physician, is quite disappointed with Nick’s choice of profession and his lifestyle in general. However, when Nick arrives, many of the towns folk, including several of the local criminal element, believe he’s there to work on a case despite his protestations that he’s just there for rest and relaxation. When winds up dead on his doorstep from a gunshot, Nick finds himself working on a case whether he wants to or not. After several more murders occur, Nick gathers everyone into the same room to reveal the true identity of the killer. Dad’s impressed.

As Nick and Nora Charles attend a charity benefit aboard a gambling ship, tensions among those connected with the ship simmer among the festive atmosphere. Tommy Drake is the ship’s unpopular and very spiteful band-leader. When someone murders him later that night, suspicion falls on Phil Brant, who had an argument with Drake earlier in the evening. When Phil and his wife seek help from Nick and Nora, Nick of course refuses to get involved. However, when someone fires a gun outside his own apartment, Nick decised to investigate. He soon finds himself in a confusing case with numerous suspects. After several more murders occur, Nick gathers everyone into the same room to reveal the true identity of the killer.