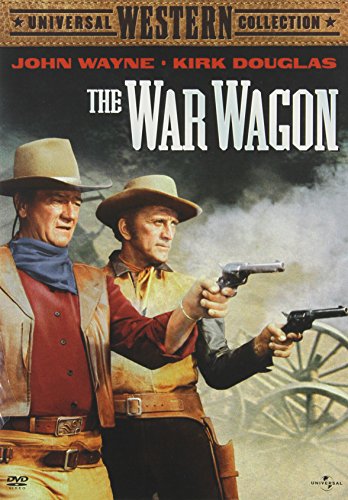 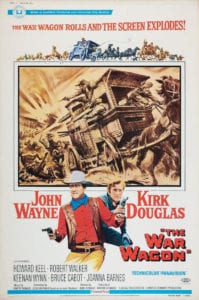 The War Wagon begins in the latter half of the 1800’s. Rancher Taw Jackson (John Wayne) returns to his hometown after being in prison for three years. Frank Pierce, a corrupt businessman, framed Taw in order to buy all of Taw’s land on the cheap during Taw’s imprisonment. Pierce wanted the land because he correctly assumed that there was gold “in them thar hills.” While Taw was busy breaking rocks in prison, Pierce became filthy rich.

Now, Taw wants some payback. He developed a plan to steal a large shipment of gold from Pierce’s War Wagon; a heavily armored stagecoach which transports the businessman’s gold, and that a small army of gunmen protect. Taw hires an Indian, an alcoholic explosives expert, an old crotchety farmer and his substantially younger wife, and a gunfighter by the name of Lomax as his accomplices.

Lomax and Taw have a history. Lomax has previously worked as a hired gun for Pierce and was instrumental in sending Taw to prison. However, Taw is willing to let bygones be bygones for the sake of the money, and his need for Lomax’s ability to crack a safe. However, Pierce wants Lomax to kill Taw, and is willing to pay him handsomely for the gunman’s lethal skills. Pierce hires him to gun down the former prisoner, unaware that Taw has already hired him to rob Pierce. Lomax weighs his options, and his possible rewards, between helping Taw and killing him throughout the entire film.

Taw’s plan is to create a diversion that will lead the mounted gunman away from the armored stagecoach and rob the “War Wagon” at the weakest point in the route it travels. Initially, everything goes well. Taw and his group are able to lure away the gunmen with the assistance of some local, helpful, savage Indians. But not everything goes as planned.

Pierce dies in a shootout with one of his own men while trying to escape from the “War Wagon.” Shortly thereafter, the wagon crashes into a ravine where Lomax is able to get inside and open the safe. The robbers move the gold to flour barrels on their wagon. However, Old Man River skims a little off the top for himself and hides a few bags of the gold in a secret compartment.

Before the motley crew is able to haul away their treasure, those pesky savage Indians return and decide to be less helpful. They try to take the gold from Taw and the gang. A gunfight ensues, killing Old Man River and scaring his wagon’s team of horses. The wagon takes off out of control, spilling the barrels across the desert, and spreading the flour and gold everywhere. A large group of female Indians rush the food and collect it before Taw and his gang can stop them.

The small trail of tears hauls away the flour and the gold. Lomax catches up to the wagon, and scolds Taw for them ending up with nothing. Taw fails to tell him about the hidden gold that he finds in the overturned wagon. The film ends up with the group agreeing to meet in six months to split up the gold. Old Man River’s wife and the alcoholic explosives expert begin a more age appropriate relationship. Lomax needs to protect Taw for the next 6 months to make sure he can get his share of gold.