As her friends prep for a Life Day holiday celebration, Rey journeys with BB-8 on a quest to gain a deeper knowledge of the Force at a mysterious Jedi Temple. There, she embarks on a cross-timeline adventure through beloved moments in Star Wars history, coming into contact with iconic heroes and villains from all eras of the saga. But will she make it back in time for the Life Day feast? 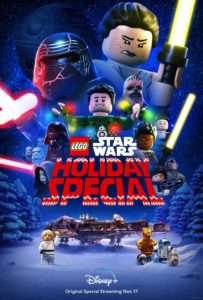 Set after the events of The Rise of Skywalker, Rey (Helen Sadler) and her friends have traveled to Kashyyyk to celebrate Life Day with Chewbacca and his family. Once there, Rey attempts to teach Finn (Omar Benson Miller) the ways of the Force. However, the training is not going well and Rey grows frustrated with her inability to teach Finn what he needs to know. After looking at the ancient Jedi texts for answers, she finds a reference to a secret Jedi temple that only appears on Life Day. Despite her friends stressing to her that Life Day is all about family, Rey leaves, accompanied by BB-8, to the mysterious planet.

Meanwhile, Poe (Jake Green) and Rose (Kelly Marie Tran) are trying to organize a Life Day celebration that will please Chewbacca and his friends. Finn and Rose are put in charge of the decorations while Poe takes on the challenge of preparing the Life Day meal.

At the same time, Rey finds the mysterious temple. She and BB-8 enter the temple and find a key that allows a person to travel through time. She uses the device to transport herself back in time so that she can learn from other Jedi masters how to train people in the Force. She first lands on Dagobah during the events of The Empire Strikes Back. She witnesses Luke Skywalker (Eric Bauza) fail at his test to raise his X-Wing out of the swamp. Rey witnesses Yoda (Tom Kane) tell Luke “Do or do not. There is no try.” After a mysterious swamp creature tries to eat BB-8, she transports them back to the mysterious temple. Rey next uses the key to travel to both the beginning of The Phantom Menace with Qui-Gon Jinn (Tom Kane) and Obi-Wan Kenobi (James Arnold Taylor), and then to the beginning of Attack of the Clones with Obi-Wan Kenobi and Anakin Skywalker (Matt Lanter). She finally ends up in the cockpit of Luke’s X-Wing during the Death Star battle in A New Hope. After returning back to her present, she is excited to learn that she can witness some of the big events in Jedi history.

Back on the Millennium Falcon, Poe’s meal preparation is an abysmal failure, while Rose and Finn’s decorations are not meeting their expectations.

Back on the other planet, Rey promises BB-8 that she will only use the key to observe one more master and apprentice. The key takes her to the second Death Star where Emperor Palpatine (Trevor Devall) belittles his apprentice Darth Vader (Matt Sloan) for the horrible Life Day gift that he received from the former Skywalker. Rey and BB-8 make a quick exit, but the Emperor and Vader see the open portal. The Emperor sends Vader through the portal with a mission to retrieve the device that made it.

Once again, back on the Falcon, guests begin to arrive for the Life Day celebration. Chewbacca arrives with his family. The Wookies are not impressed with the party, so Finn and Rose make some plans to liven up the party.

Back on the other planet, Vader and Rey battle over the key. They inadvertently open another portal and take themselves back to Hoth during the Imperial invasion. The snowtroopers become confused by a second Vader in the base. The two Vaders battle each other before realizing that they are the same person from different times. They decide to join forces to battle Rey. Another portal opens and Rey finds herself and Vader pulled into the lava battle between Anakin and Obi-Wan in Revenge of the Sith. Another portal opens taking her, Vader, Anakin, and Obi-Wan to the end of season one of The Mandolorian where they all gush about how cute the Child is. They are there shortly before the portal opens again pulling even more people into the time jumps. They continue to jump around the Star Wars time line and pull more and more characters into the time portals. They end up outside of Luke’s moisture farm on Tatooine. All the characters begin to get into one big epic battle while a blue milk drinking Luke watches on.

The young Luke accidentally opens another time portal which takes Vader, Rey, and Luke back to the present again. Vader gets his hands on the key and takes it back to the Emperor in his time. The portal closes before Rey can pursue him. The Emperor uses the key to travel to Kylo Ren’s (Matthew Wood) bedroom shortly after the events of The Last Jedi in the future. Kylo is star struck by his idols and has the unfortunate duty of telling the Emperor of how his reign came to an end. The Emperor is disappointed to learn that Vader was the one who betrayed him and decides to take Kylo as his new apprentice. Vader is allowed to follow in disgrace. Meanwhile, Rey and Luke work on a broken BB-8 and get to know each other.

Back on the Falcon, Max Rebo (Dee Bradley Baker) arrives at the party to provide music for Life Day. Lando Calrissian (Billy Dee Williams) and Maz Kanata (Grey Griffin) show up at the party. Finn and Rose tell Poe that they invited pretty much everyone to the party with the idea, the more the merrier.

Back on the second Death Star, the Emperor sends Vader down to the forest moon of Endor to retrieve his son despite Kylo warning him that is the exact chain of events that leads to the Emperor’s downfall. Meanwhile, in the present, the ghost of Yoda councils Rey and teaches her that she is not a failure as a teacher. Through the Force, he shows her Finn at the Life Day party who saves some people from having a tree fall on them by using the Force. Rey learns that she needs to not focus on her own failure, but she needs to learn to be Finn’s friend. Luke reappears with BB-8 and he tells her that she has the power to find additional keys to open another portal.

Rey immediately takes both herself, young Luke, and BB-8 back to the second Death Star. At the same time, the Emperor tells Kylo to throw the older Luke and Vader down the shaft when they return from Endor. Once Kylo sees Rey and Luke, they begin to battle. The battle is soon joined by Vader and the other Luke Skywalker. Vader learns of the Emperor’s betrayal and has difficulty choosing sides. Eventually Kylo fights Return of the Jedi era Luke while Vader and Rey battle. During the chaos of the battle, BB-8 retrieves the key from the Emperor. Rey uses the key to send Kylo back to his time. The Emperor gets the key back again after knocking both Lukes and Vader unconscious. Rey and the Emperor struggle in the Force over the key before the Emperor is knocked down. Rey uses the key to take the young Luke back to his time. Vader throws the Emperor down the shaft.

Back on Tatooine, Rey returns Luke to his home before using the key to send all the battling Star Wars characters back to their respective time lines. Rey then returns to her time and flies back to Kashyyyk for her friends’ Life Day celebration. Once Rey is reunited with her family, including C-3PO (Anthony Daniels), and tells them that what she was looking for was in front of her the whole time. Rey tells Finn he is ready to become a Jedi and allows him to use her lightsaber to carve the meal. Everyone goes outside the Falcon when it begins to snow on the Wookie planet. Everyone celebrates Life Day, once again happy to be together.